HTC is holding an event on October 8th in New York City and many are speculating that this will be when they announce their new durable underwater camera. This new device is being called “GoPro like” in durability and also giving the users the ability to take pictures underwater.

The tube shaped camera will feature an ultra-wide angle lens and a 16 megapixel sensor. It will also have the ability to connect via Wi-Fi or Bluetooth to both Anroid and iOS devices, with the apps for both coming from HTC as well.

HTC is also expected to announce a new smartphone at this event. This smartphone will supposedly have a better camera for taking the “selfie”. Many teenagers and adults alike will be happy to hear this.

HTC has had declining sales over the years with their smartphones, hence the reason for joining …

END_OF_DOCUMENT_TOKEN_TO_BE_REPLACED
Permalink | Comments |
Posted in Cameras by Shane McGlaun on May 23rd, 2008 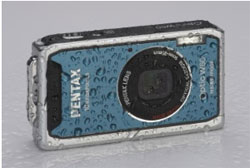 When it comes to cameras typically if you get them wet you will soon be in the market for a new camera. However, there are times when you want to take pictures in and around water like at the beach or the pool. For these times using a normal camera can be ill advised.

Pentax has announced a new waterproof camera called the Optio W60 that has a 10 megapixel sensor and 5x optical zoom with a 28mm wide-angle lens. A digital wide function merges two shots into one for an ultra-wide-image.