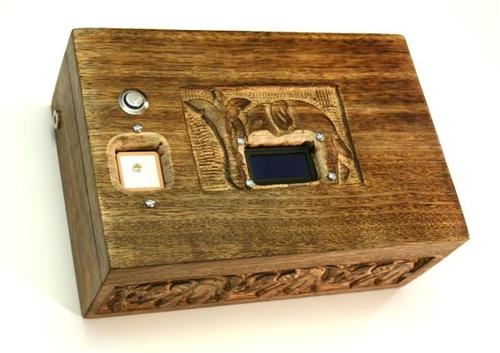 Say you’re a bad guy. A villain. The Joker maybe. You want to taunt Batman, but you need a new gimmick. Aha. Tell Batboy that there’s a bomb in this GPS Puzzle Box that will go off in exactly one hour. But here’s the catch Batbrain, you can only disable it by opening the box. And the box will only open at a specific location. So after Batman gets the box and zips to the location in the nick of time, he’s able to open the box. Inside he finds not a bomb, but a pop-up Joker face. Meanwhile, you’ve been gassing Gotham city, which is now yours.

Well, you could use this Puzzle box like that. It was built as a wedding gift by Mikal Hart. It only opens when it’s in a specific location, and the puzzle involves discovering just where that location is. There’s a button and an LCD display on the lid. When you press the button, the display shows you how far, in kilometers, you are from the goal location. It doesn’t give you directions, so you need to triangulate and you can only press the button 50 times.