Posted in Mobile Phones by Darrin Olson on February 15th, 2010

Nokia and Intel have teamed up to create MeeGo, a new open source software platform for use on mobile devices. The new platform will be a combination of the best features from the two companies existing platforms and will not target just smartphones but also tablet PC’s, netbooks and even connected television devices.

This announcement comes shortly after Nokia announced that the Symbian platform was going open source and hot on the heals of Google and their newly popular Android mobile software platform, in a clear chase to regain some of their market share. Nokia says the plans for the Symbian platform have not changed but will be used on less expensive smartphones, with the more expensive devices running MeeGo. 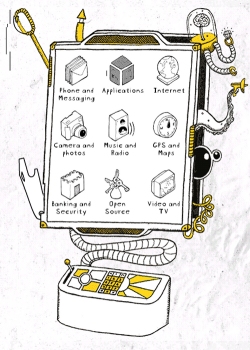 Symbian, the world’s most popular smartphone operating system, has announced that it’s going open source about four months ahead of schedule. This move will allow more software developers to have access to develop applications and mobile devices based on the operating system.

The plan was to complete the transition of putting the OS under the Eclipse development license and work out deals with existing third party developers by later this summer. Symbian was able to move ahead more quickly, most likely to try and keep an edge on the newer open-source Android mobile operating system from Google.