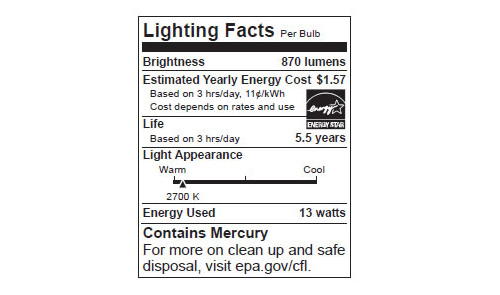 Why does everything need to be complicated? It used to be that you would just buy some light bulbs and screw them in. But soon, when you buy a new light bulb you’ll see a new Nutrition Facts-style label that shows you the numbers most important to you: like how bright the bulb is, what the energy cost is, and when they’ll burn out.

I guess it’s a good thing. I just like to buy bulbs and plug them in without worrying about the facts. The new numbers tell you a bulb’s typical energy cost and average lifespan, which are probably the mainthings I would want to know. The new light bulb labels are expected to arrive sometime in mid-2011. 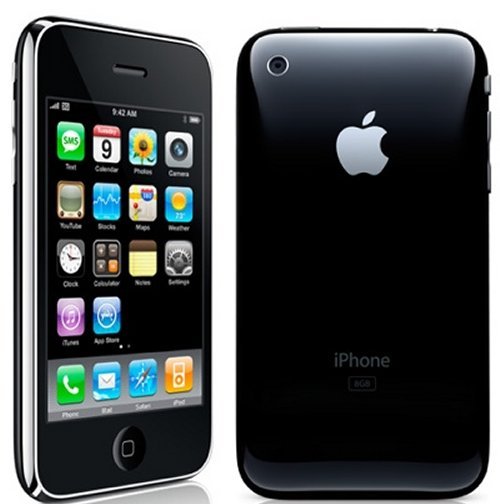 The debate continues as to whether or not cell phones can harm us, but one state may be ready take the next step in warning consumers about the dangers. If she has her way, a Maine legislator wants to make the state the first to require cell phones to carry warnings that they can cause brain cancer, even though there is no consensus among scientists that they do.

Cell phones carry these warnings in some countries, but right now no U.S. states require them. A similar effort is underway in San Francisco, where Mayor Gavin Newsom would like his city to be the nation’s first to require such warnings. These measures seem premature, given the fact that there is no hard data to support the claims. 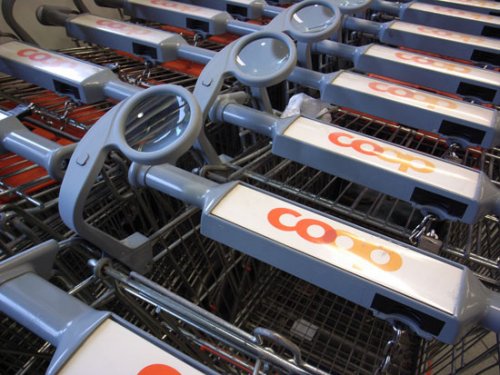 You want to eat healthy, but it’s hard. Those nutritional labels are small for a reason. So they are hard to read. You’d rather focus on how delicious those chips are going to taste in an Oreo sandwich. But some of us actually want to know what we are putting in our bodies. Some people are obsessive about it. Whether you are just watching your sodium intake or you believe that too much high fructose corn syrup will give you erectile dysfunction, it could sure be easier to read those labels with a shopping cart like this.

These carts feature a built-in magnifying glass so you can easily read the package as well as have a closer look at the shrinking boxes they are giving us for the same money. The carts can be found at a co-op in Geneva, Switzerland, but I think we here in the US could do with some. 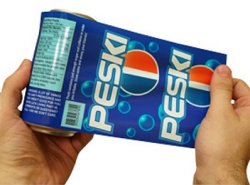 You and I both know that “the man” has been trying to keep you separated from your brain numbing booze. He won’t let you take your precious juice into theaters, stadiums, preschools etc. How are you expected to get through the A.M.? Well now you can stick it to “the man”(Who everyone knows is illiterate) Now you can hide your beer cans in Canouflage, re-usable can wraps that make your Budweiser look like a Pepsi (Peski). The wraps cost $6 for 4.

You and your beer will never be apart again! Just act right! “The man” may not be able to read, but he knows a drunk ass fool when he sees one! Product Development really worked hard to come up with some convincing names too, like Peski, Sunkpiss and Mountain Spew.