Kenwood’s new CD player has wood. It is dubbed the U-K525LT and sports a nice retro look, making it both stylish and elegant. It’s based on the existing U-K525 that was released this year. Goes nice with your wood grain Atari console.

Besides playing CDs, the U-K525LT also supports iPods, iPhones, WMA, AAC and MP3 file formats, FM radio and USB data storage compatibility. Did we mention that it also has wood? The Kenwood U-K525LT will cost you 44,800 Yen in Japan. That’s $539. Plus…wood.

END_OF_DOCUMENT_TOKEN_TO_BE_REPLACED
Permalink | Comments |
Posted in Sony by Conner Flynn on May 18th, 2010 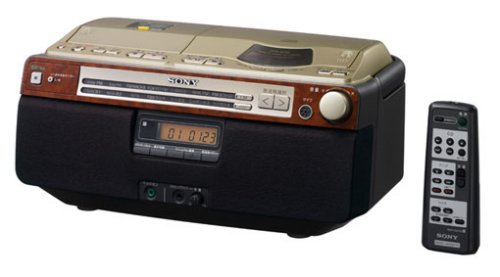 If you like your music players to be retro, then check out this latest product from Sony. The Sony CFD-A110 is a combination cassette tape player, CD player and a radio tuner. But check out the design. Love that fake wood blending the old with the new.

Sony will release the CFD-A110 cassette tape, CD player and radio combo on June 21st so you can have an old-school Summer and listen to all of your old stuff.

You can control your iPod directly from the front-panel or using a wireless remote, plus you can play videos through an S-video connection on the back. The front-panel Folder navigation buttons change folders on CDs and albums on the iPod. The device also supports CD TEXT and ID3 tag info. 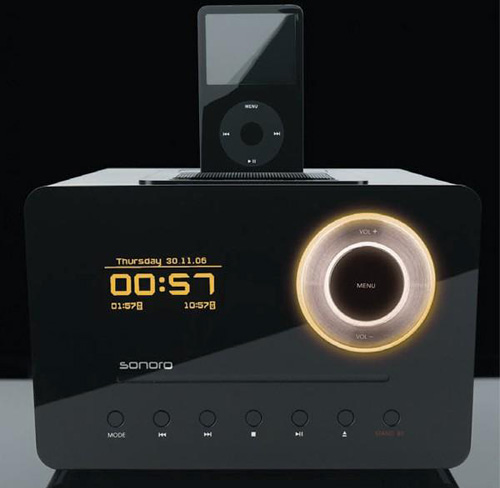 This clock radio/iPod dock has been in Europe for a while, but looks like Sonoro’s Eklipse iPod dock/CD player/ clock radio has only just gotten official for the US, and even has a price. That price is a shocking $550. The time must be displayed in real gold.

That price gets you 7.5W of power output, an OLED display, remote, and an auxiliary jack along with your iPod dock and slot-load CD. No official word on a release date, but soon you should be able to pre-order. 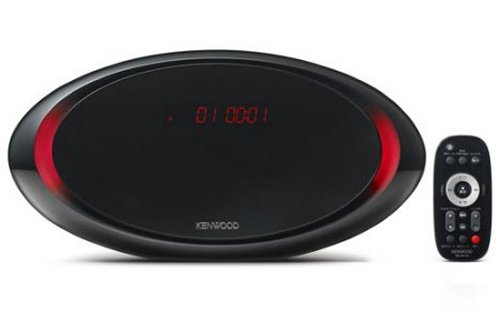 Kenwood’s new all-in-one audio system, the CR-iP500 is a CD player and an iPod dock that features a strange otherworldly look. It must be aimed at those who still use CDs on a daily basis along with their iPod. It’s a CD player, FM tuner, iPod dock, and sports USB 2.0 connectivity with 2 x 5W 80mm speakers. Not much to see here. 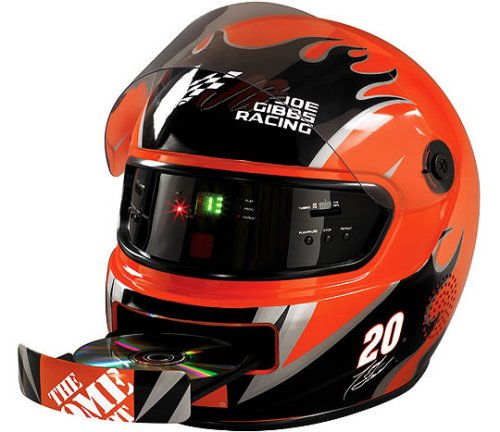 It’s like somebody decapitated a Nascar robot for your musical enjoyment. While I’m not a big fan of watching cars go around in circles all day myself, while hearing phrases like “y’all” and “get her done” and the like, this makes me actually want to see a robot Nascar driver. There’s just something cool about LED’s under a helmet and a CD tray mouth branded with my favorite home renovation store.

It’s an AM/FM radio and CD player helmet, designed like the one Tony Stewart wears when driving his #20 Toyota Camry for Joe Gibbs Racing. Comes with a remote control. It would also double as a nice psycho trophy for the unbalanced Nascar fan who hasn’t managed to get close enough to bring home a head of their own for their desk. It will cost you $140 from Wal-Mart. Just where you might expect to get a gem like this. 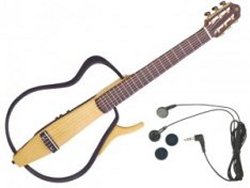 If you have a kid learning the guitar chances are your ears could use a break. You’ll want to invest in this Yamaha Silent Nylon String Guitar. Plugging in a pair of headphones lets you practice at your own pace without annoying everyone around you.

You can also connect a CD player into the guitar itself so you can play along directly with the music, despite the fact that CDs are pretty much obsolete. Why they didn’t just build an mp3 player in it is anyone’s guess. Still, it’s a nifty instrument to have around. Especially fo those living in small apartments. The Yamaha Silent Nylon String Guitar will retail for a hefty $499.99. But silence is golden. 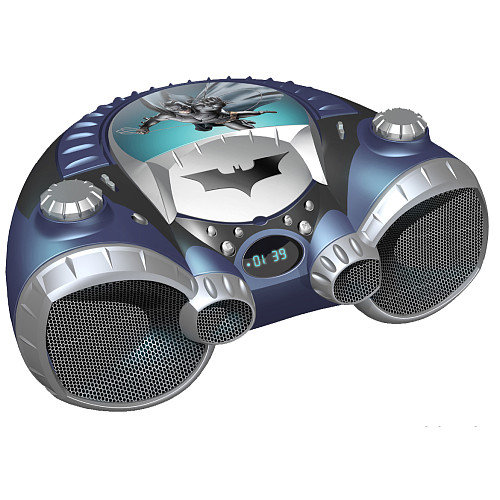 How does Robin crank up the tunes while Batman is out cleaning up the streets of Gotham? With Batman’s boombox of course. While it’s not shaped like a bat-wing or anything, it has a strange shape that resembles a…bat-something or other, with colors that go more with the comic books then the movies.

Features include such things as a tuner with LCD display, the ability to play CDs, CD-R and CDRW format, dynamic bass boost, line-in for portable MP3, player support, and top load media. It’s not hard to imagine Batman entertaining Catwoman one night and as he goes to put on some soft romantic tunes, the sound of Robin’s hardcore heavy metal deafens him as it sends bats flying everywhere. After a moment he switches CD’s, but sadly Catwoman’s purr is now gone. Such is the sad and lonely life of the Batman. Sigh. 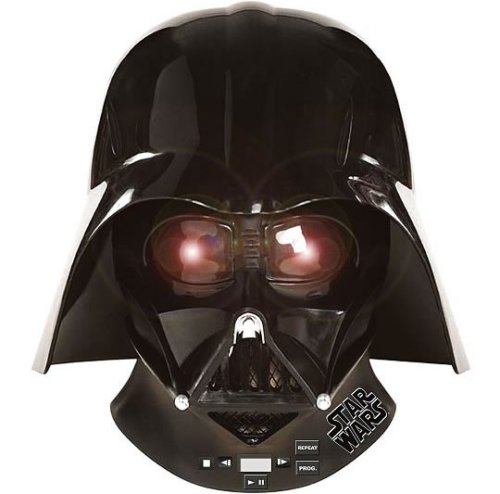 Only Darth Vader could be so evil as to offer up a radio/CD player combo in the age of digital music. Such is the dark side. The crappy sound quality will make you suffer, suffering will lead to hate, hate will lead to anger and anger will lead to fear and before you know it you’re the latest Sith apprentice. Still, there’s always something cool about having Darth Vader’s helmet nearby.

And despite the fact that it plays CDs and offers the radio, it does have the option to connect your MP3 player so I guess it’s not all that bad. It’s got six buttons to control the music plus two apparently hidden inside the mouth for some reason. As an added bonus, when you play a CD you can see it spinning in Vader’s eyes with have red LEDs. Requires 6 x LR14 batteries. The price? $88 Yeah, Vader is evil. Am I gonna pay $88 for a CD player? I think not. 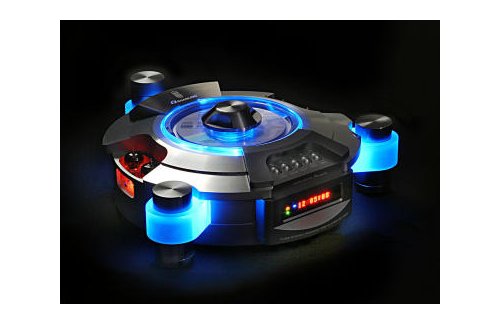 What with everyone on Earth having an iPod, if you’re going to dare to make CD players, it’s a good idea to at least make them different. One way to do that is to make it look like a UFO. A UFO that says, “Screw you human, we believe CDs are far superior to MP3s”. If you don’t believe them, they’ll convince you with a rectal probe or two. Has anybody ever done a study on how many abductees rush out and buy new CD players? The numbers might shock you.

The Chinese company Shanling specializes in shall we say odd CD players with unique looks and characteristics. Their latest, the CD-T300 Pro has four amplification valves, two remote controls, and gold-plated tube legs. But the most striking thing about it is that it looks like it is about to shoot a beam out the bottom and pull a cow onboard. 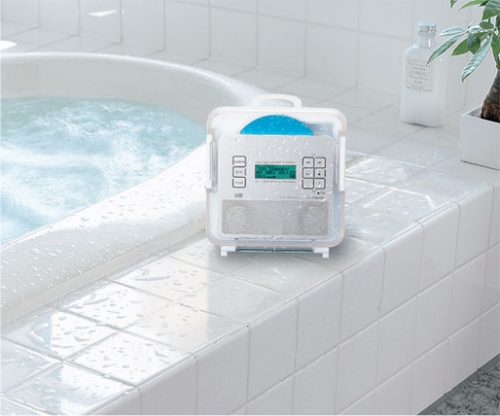 Twinbird has another splash-proof, portable music player available giving you more options to bring you tunes into the bathroom This one has an internal USB port to connect your thumb drive loaded with MP3 or WMA files to play in the bathroom or other damp areas that would otherwise brick a normal media player. One the drive is plugged in the case can be closed and the music can be selected from the outside.

In addition to playing digital music from a portable drive the Twinbird CD ZABADY AV-J189S also houses a CD player and an FM radio. It runs on internal batteries that can bring up to 7 hours of radio, 5.5 hours of MP3 playing or 4 hours of CD playback. It also has built-in speakers and a convenient handle on top to port it around. Internal picture of the player after the jump.