Posted in iPhone by Conner Flynn on December 7th, 2008 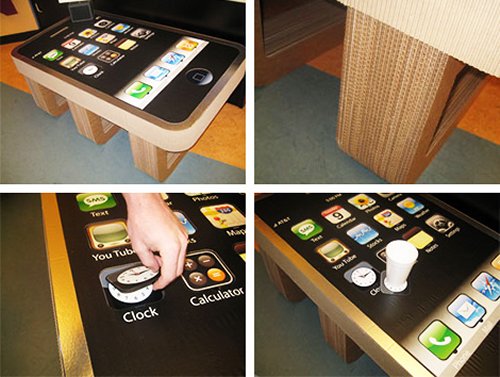 Here’s one nice looking piece of geek furniture. The iPhone’s colorful icons translate well into spots to park your drinks. Oddly and sadly, the iPhone Coffee Table has no special dock for your iPhone, and it won’t run any apps. It’s just a really kick-ass coffee table featuring the home screen.

One cool feature is that each icon features a removable coaster so guests won’t scratch up your giant nerd-decor. The creators claim that it’s “completely made of corrugate and glued together with white glue”. Anyhow, the end result is a beauty. 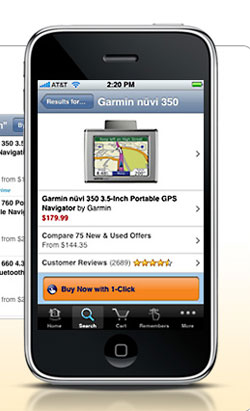 Many who shop online head to Amazon when it comes time to buy. Amazon has one of the largest product inventories online and makes shopping fast and easy. Amazon is always looking to make shopping on its site easier for users and has announced its first iPhone App.

The Amazon app will work on the iPhone and the iPod touch. Using the app users can browse the Amazon inventory, view Customer Reviews, and buy using Amazon’s 1-click Shopping and Amazon Prime. 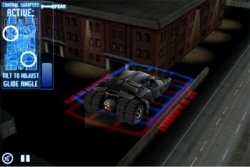 You may now pilot the Batmobile for the low price of $0.99, thanks to Glu Mobile and your iPhone/iPod Touch. You can mess around and drive through the Batcave, the streets of Gotham City and even rooftops.

It looks like more fun then any Bat-fan should be able to have for a dollar. According to Kotaku there’s only about a minute or so worth of gameplay, but still we’re talking a lousy buck here. It looks nicely put together and well thought though. So it will be an awesome minute. 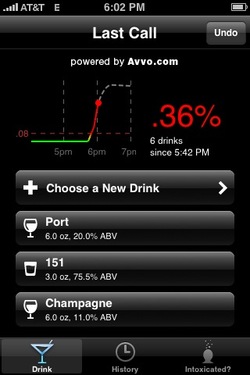 The Last Call iPhone app tells you how drunk you are, because you are probably way too far gone to judge for yourself. It determines this using your weight and how many drinks you’ve had already. It also calculates your drunkenness by what type of alcoholic beverages you’ve consumed, and it will even offer advice on what to do next now that you’re three sheets to the wind.

If you’re too blitzed to drive, you can press a button and it will call a taxi for you. Best of all, it’s free, which means more booze money. Now all you need is an app that shows how much of your liver is still healthy and calculates how much more drinking you can do until your final days. 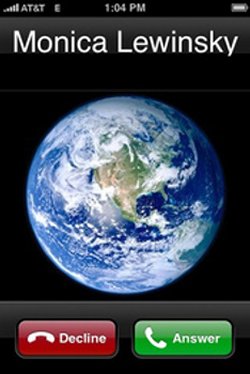 Here’s one useful app that can be had for just $1. Fake Calls does just what it sounds like, it lets your iPhone simulate receiving a phone call shortly after launching the app. The best part is you can set the name of the caller as anyone you want. “Oh excuse me I have to take this call from Steve Jobs. He’s having trouble thinking up new ‘i’ names.” Hey, why not. We’re talking $1 here. Help prop up the economy.

Obama has an iPhone app, so it’s only fitting that John McCain have one too. Here you can interact with the cranky maverick and get him to make all of his weird old man grunts, say “My friends” and such. It’s not official, and may only work on jailbroken iPhones, but this is way too much fun. You can even put the old sour-puss to sleep when he gets too cranky. 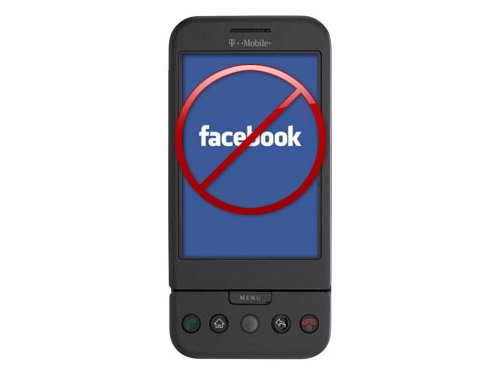 In a surprising move, Facebook won’t be creating an application to run on T-Mobile’s G1 Android-powered smartphone, even though it is available for the iPhone and BlackBerry. Considering this, Facebook fans who are in the market for a new phone will probably pass on the G1.

Facebook commented that Google or another third party will have to develop the application for them, as they don’t want to dedicate any resources toward developing an app for Android. If you want to take a paranoid look at the situation, consider this. Facebook is ad-served and invested in by Microsoft. Make of that what you will, but just because your paranoid, doesn’t mean they aren’t out to deny you a phone app.

Seems like every time you turn around, the iPhone gets even more versatile. Is there anything it can’t do? Check this out. This iPhone Jack-O-Lantern is created with an application known as Crazy Pumpkin. It basically lets you customize your iPhone’s display into cool Pumpkin faces. Sadly, you won’t want to set it outside for some kid in a robot costume to steal. Sure, they aren’t as awesome as these pumpkins, but pretty cool. 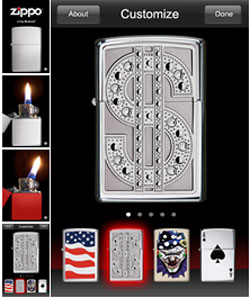 One thing that has been a concert going tradition as long at power ballads have been around is holding your cigarette lighter above your head with the flame going. This can be a problem if you want to partake in the tradition but don’t smoke. Zippo has just the thing for non-smokers who want to participate.

Zippo and software firm Moderati have launched a new App for the iPhone that is available free on the Apple App Store. The application is called the Virtual Zippo Lighter and will work on the iPhone and iPod touch. 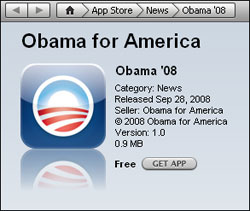 The Vice Presidential debate this evening will take place in about a half hour. Earlier Obama for America announced the release of Obama ‘08: The Official Application for iPhone and iPod touch. Much like the USB bracelet we told you about, it’s another way to connect with the candidate. The app is free and is available for download now. The app makes it easier for Obama volunteers to get involved by making calls on the candidate’s behalf.

You’ll also get news updates, news coverage, local events, media from the campaign trail, and of course Obama’s and Biden’s stance on “essential issues facing Americans.” I’m interested to see what kind of affect this has on election results as I don’t see anything like this coming from McCain’s camp. It makes it clear that the youth/tech savvy vote is Obama’s. And he’s making it easy for them to get more involved. McCain may take credit for the Blackberry, but good luck getting an email from him anytime soon. I’m pretty sure his phone still has a rotary dial. 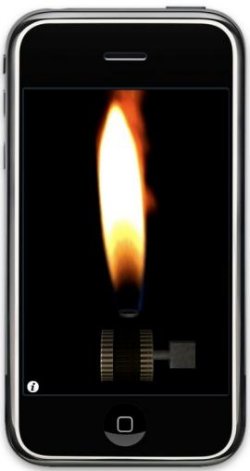 Sonic Lighter is a new app from Smule that let’s you flick your Bic, so to speak. It gives yoyr iPhone a simulated flame that you can control by touch or tilt. Start the display and light your fire. If you like, breathe on the device to control or extinguish the flicker. Just be careful others are not laughing at you nearby. I know what you’re thinking. All this for 99 cents? Freakin amazing right?

But it is capable of so much more. Like, if you find yourself without a lighter during a concert for instance. And because it contains a sonic modem that lets you ignite nearby Smule-enabled phones, you could “spread your light” and maybe really liven up said concert. Smule even has a nifty World Wide Ignition Map that traces recently lit flames around the globe. Cheesy? You bet ya. Now if it detected farts jettisoned out of your Levi’s and ignited nearby flames accordingly, I’d be impressed. It doesn’t take much really. Just innovate a little. C’mon people. Check out a video below. 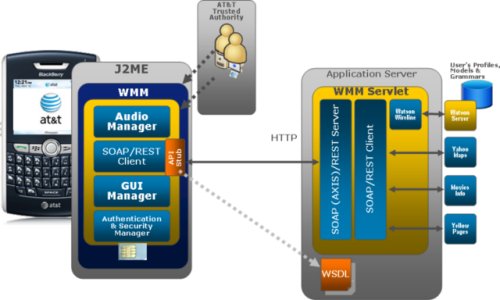 Those wanting voice recognition for their iPhone may be in luck soon. AT&T has been working on a web-based platform called Speech Mashups. It works like this. The platform sends your speech to a remote server, translating commands to control your handset. Since it’s web-based, other devices aside from the iPhone will be able to use the technology as well.

It will be compatible with most browser-equipped AT&T handsets, wireless devices and even TV set-top boxes. You just need an Internet connection. One downside with the iPhone is that Speech Mashup can’t perform voice-dialing because it is compatible with web-coded apps only. Still, it’s a fascinating development. 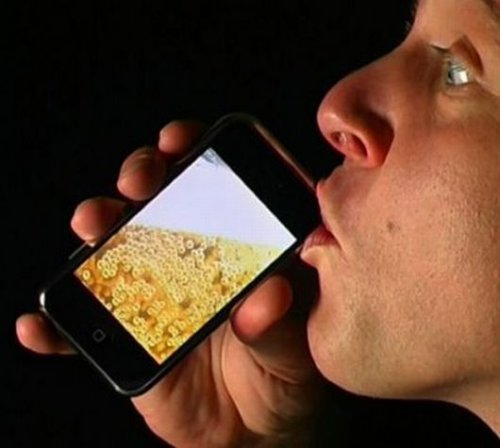 What’s better then the new iPhone? Two things actually: An iPhone from the future and a nice cold beer. Now you can combine your love of brew with your iPhone love thanks to this neat app that uses the iPhone’s tilt sensor to simulate you drinking it down as you raise it to your lips.

Just don’t lick your lips and slam it down on the table like a mug. You paid a lot for that thing. iBeer can be found at iTunes for $2.99. They also have iMilk for some reason. Check out a video below.

With so many apps for the iPhone, looking for something cool can be like looking for a needle in a haystack. Well, here’s a real gem that will have Star Wars fans dancing around and accidentally throwing their iPhone against walls like it was a Wiimote.

It displays a lightsaber on screen and uses the iPhone’s accelerometer to generate the corresponding sound effect based on your movements. You can choose the lightsaber color and everything. What are you waiting for? Go have fun and break stuff. 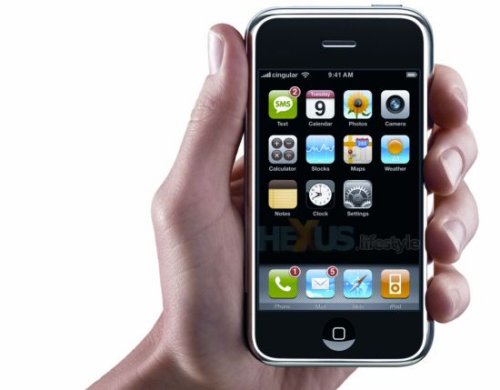 iPhones will now control aircrafts from the ground, thanks to some geeky iPhone app developers. Researchers from the University of California, Berkeley have apparently broken Apple’s terms and conditions when they used the iPhone to guide unmanned aircraft. The Apple Software Developer Kit agreement states that the applications are not to be designed or marketed for automatic or autonomous control of aircraft.

Too late now. And why would they care anyway, they’re having way too much fun. The team uses Mobile Safari to input coordinates and then selects tasks for the unmanned flight that are relayed to the aircraft through a web server. Check out the video below.