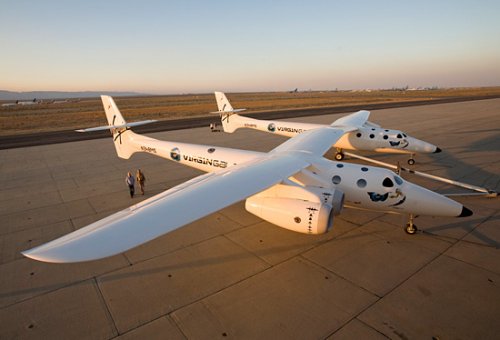 The WhiteKnightTwo is the aircraft that will launch SpaceShipTwo into suborbital space. Today in the Mojave desert, those who are still dreaming the dream unveiled the top-secret craft. The craft’s first job is to serve as a flight simulator next month for pilots. Pilots that will shuttle citizens into space and usher in a new era of space travel. Assuming everything goes as planned, it should begin flight testing at the end of September. Except for the engines and landing gear, the entire craft is made from carbon fiber composite.

According to Virgin Galactic, both ships will be ready for their first flight together in 2009 or 2010. Fittingly, Richard Branson and his family will be the first onboard. The space flight lasts 2.5-hours with five minutes of weightlessness before the ship comes back to Earth.