Posted in Concepts by Conner Flynn on August 11th, 2008 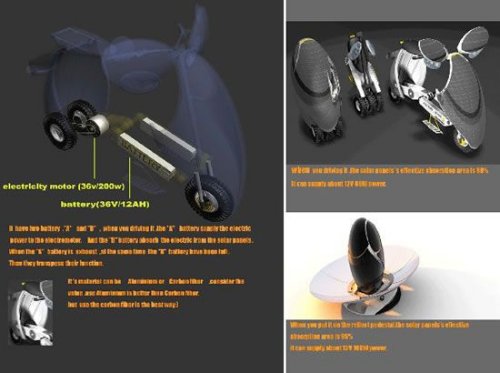 This one was conceived as a green and portable commuter transport. What we have here is a fold-up bike that runs on solar power obviously. The name says it all. Power is stored in a battery that you can use at night, and you can even power your other gadgets, like your iPod.

It looks kinda cool in bike form, but when you fold it up it resembles an alien egg that appears to be sending signals to it’s home world. In fact it’s not sending signals, but it’s pointed upward so that it can track the sun’s movements in order to maximize the power it’s sucking down. Even so, it’s still creepy. One day it might get it in it’s head that you belong in that egg so it will keep you there as it points toward the sun, warming you in your egg, so that you can hatch out as a new lifeform.

END_OF_DOCUMENT_TOKEN_TO_BE_REPLACED
Posted in Biking by Darrin Olson on May 20th, 2014 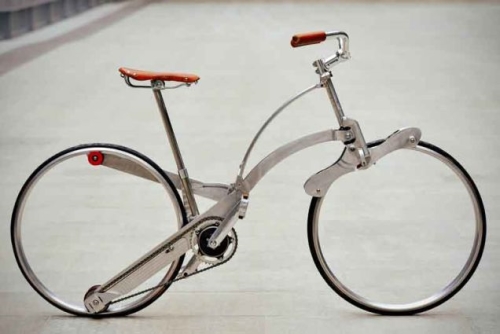 We’ve seen quite a few folding bikes over the years but none quite like the Sada Bike. The unique part of the design here is that the wheels are hubless, having no center sprocket and no spokes. The bike folds with one motion and the wheels come away from the frame completely.

Anyone that has done some bike riding might question the loss of leverage through gears on a center sprocket, and anyone that is a little bit of a heavier rider might also quickly note that the wheels without …

END_OF_DOCUMENT_TOKEN_TO_BE_REPLACED
Posted in Concepts by Shane McGlaun on July 9th, 2010 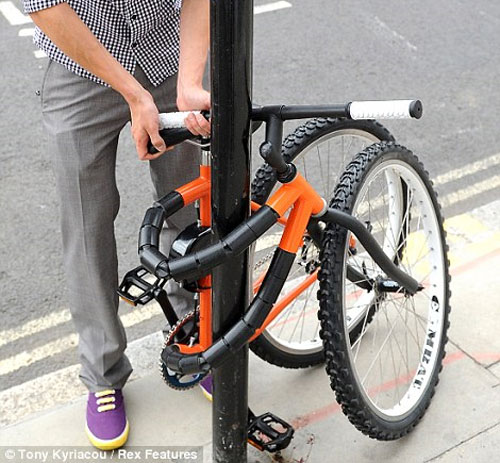 Here in the sprawled out state of Texas most of us can’t use a bike to get around unless we are in one of the big cities. It’s also hot enough to melt the tires off your bike in the summer so you have that to deal with in additional to worrying about your bike being stolen.

A designer has designed a new concept mountain bike that has a bendable frame to eliminate the fear of theft. That frame is designed to allow the bike to wrap around a pole to prevent theft. 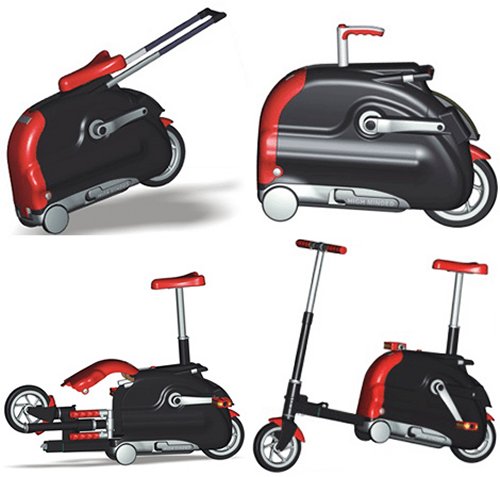 This Suitcase is also a folding Bicycle from Happy bike, designed by believe. It’s not just a concept, it’s really for sale. The bike can be folded down into a complete suitcase and they say that you can open or fold it down in only 10 seconds. It only weighs 8-9 KG. I’m not sure that it would actually hold much as a suitcase, but if you travel light, just imagine getting off of a plane, walking through the airport and transforming your suitcase into a dork bike for the ride home.

END_OF_DOCUMENT_TOKEN_TO_BE_REPLACED
Posted in Concepts by Conner Flynn on July 9th, 2008 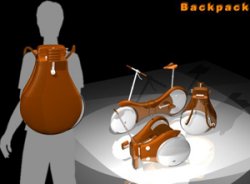 Whether you just like to bike everywhere or you’re the 40 year old virgin, this concept sure would come in handy and you might even earn some respect for having a cool gadget type bike. The bike weighs just 5.5 KG and is 60cm in length and is stored easily in your back pack. As a bonus it even doubles as a hand cart.

Some of the bike features include a headlight, back light and turn signals. The whole thing looks pretty unsafe if you ask me. You’re not going survive any kind of impact. In fact, you’ll probably get severely hurt hitting a pot-hole. It’s just a concept for the moment. 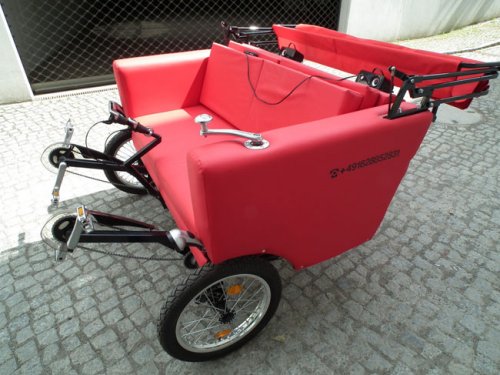 Sofa transport. That’s what we’ve been waiting for. The Sofa Bike is the creation of Jacek Holubowicz and was recently displayed at the International Design Festival in Berlin. It has two separate 8 gear hubs, hydraulic brakes which are operated by the front handlebar and dynamic chain steering.

We want one. It would get us off the couch- Wait, no. It also has a built in stereo, a 17 mAh battery, and a convertible roof that can be folded down. 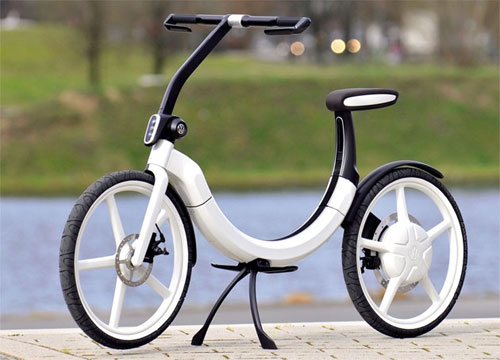 There are a number of electric bikes and motorcycles on the market today. The good thing about these devices is that they are green and quiet. There are lots of folks that like to commute on electric bikes rather than drive cars.

VW is a major car brand that has not been tied to electric bikes before. The firm unveiled a new electric bike called the bik.e at the Auto China 2010 show. The bike is designed to fold up and fit into the spare tire area of a car. 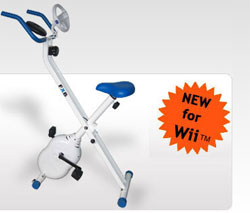 Go to any elementary or middle school today and you will see right away that many kids today are obese. I like my video games as much as the next person, but kids need to run and play too so they can get some exercise. The Fun Xercise Bike for the Wii has debuted to help kids get fit while they play games.

The folding bike has a steering wheel attachment connected to it for inserting the Wii remote for games like Mario Kart. Apparently, the pedals have nothing to do with the game and the user doesn’t have to pedal to get the kart to go on screen. 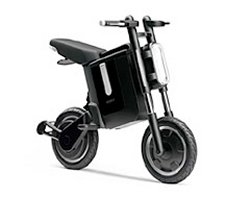 Some things are meant to be. Peanut Butter and Jelly, Ben and Jerry, Brad and Angelina. And now apparently, biking while surfing the web. I’m talking about the Bobby prototype electric bike from Yamaha motors. Pedestrians will never know what hit them, while you read your favorite blog. Aside from distracting you with the wonders of the web, the bike can be easily turned on and off using specific cell phones.

Some other features you can use when you are no longer impressed with having the web on 2 wheels are: a collapsible seat, fold-in rear wheel, handlebars and footrests making the bike a breeze to store.

END_OF_DOCUMENT_TOKEN_TO_BE_REPLACED
Posted in Concepts by Conner Flynn on July 1st, 2010 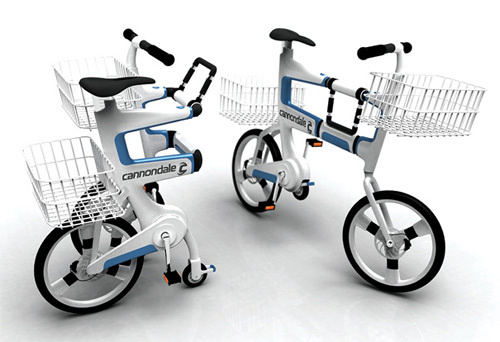 Now you can take your bike shopping and also take your shopping cart for a ride thanks to the transforming Ville concept folding bicycle. It’s a bike/shopping cart hybrid vehicle for eco-friendly shoppers. It is bicycle and grocery cart in one.

The idea is that thanks to the bike’s shopper-friendly design, you can take it with you inside the store, so you don’t have to have it stolen. The fact that it will actually hold your groceries is a bonus.

END_OF_DOCUMENT_TOKEN_TO_BE_REPLACED
Posted in Tools by Conner Flynn on May 11th, 2009 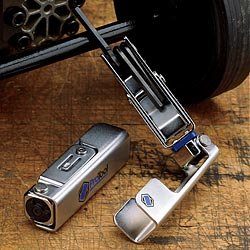 Whether you are building a ton of Ikea furniture or putting together a bike, the trusty old Allen wrench is a part of it. But the only thing that sucks about the little tools is that they don’t operate like a ratchet.Well, now you can have your Allen wrench and your ratchet all in one,

They’re available in both Metric and Imperial and come packed with 9 different sized keys from 1.5mm to 6mm. It features a clever design where the fold out cover becomes the handle and it can rotate a full 360°. Now this is a useful tool.

END_OF_DOCUMENT_TOKEN_TO_BE_REPLACED
-->
Posted in Personal Transport by Conner Flynn on May 10th, 2009 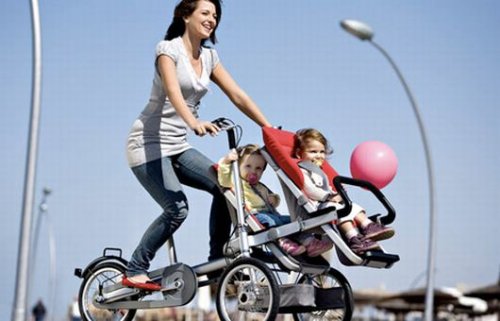 It’s been the same for as long as I can remember. Moms have been forced to push their little ones everywhere. Isn’t it enough that they pushed the kid out in the first place? Moms need a break. So it’s fitting that on Mother’s day we show you the Taga stroller/trike.

This baby folds up so you can fit it in the car trunk for trips. And it also has a wide range of attachments, like a setup for two kids, covered seats for rainy weather, and baskets. You can even adjust the length of the trike to work with whatever load you are carrying. 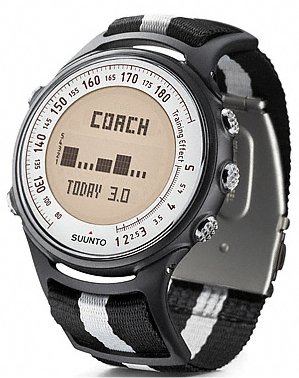 For the athlete in training (or wants to be in training) the Suunto t4 monitors your progress through your heart rate and optional accessories to measure steps, and makes intelligent workout recommendations for frequency, duration and intensity.

The Suunto actually makes the recommendations and you can accept them or not, and it continues to change based on the work out you have done and what your heart rate is. If you skip out, this little wrist coach has you make it up, if you work hard, you might get a break …