Posted in Hello Kitty by Conner Flynn on November 10th, 2009 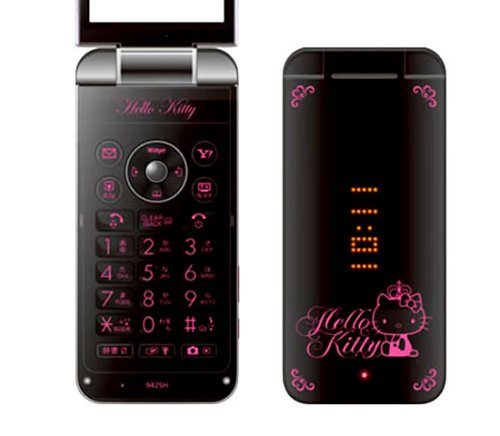 Another day another Hello Kitty phone. This one is all lit up like the Kitty went to Vegas and had a good old time. Probably counted some cards, drank too much, got into a knife fight, had a three way with some dancers and narrowly escaped a mob hit.

The 942H KT is pretty much an average flip phone, but when opened the pink highlights and Hello Kitty logo show up. Some other features include: 1-Seg television viewing, 3D gaming, GPS, electronic wallet features, and 3G. Nothing on pricing, but when the kitty shows up, girls empty their wallets.

END_OF_DOCUMENT_TOKEN_TO_BE_REPLACED
Posted in Hello Kitty by Conner Flynn on May 14th, 2008 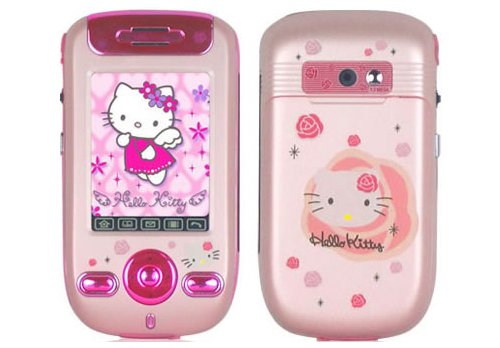 For those of you who love Hello Kitty, check out this new pink Hello Kitty themed mobile phone which includes a Hello Kitty-themed speaker system. It runs on GSM 900/1800 networks and comes with a 2.2-inch 260k color screen with 176 x 220 pixels, 1.3-megapixel camera, microSD expansion slot (512MB), integrated MP3 player, 16-LED flash sidebar, USB connectivity and preloaded with games that will brainwash you into thinking “pink” and buying more stuff with a kitty on it.

The phone even has a shake control feature for the music player where you can shake it for the next track. No word on pricing and availability. Yeah, I know, another damn Hello Kitty product. What are ya gonna do? Resistance is futile at this point. I put a bullet in a Hello Kitty MP3 player once and it just reformed, got up and spawned a new product. I ran for like 2 days and they just kept multiplying. They finally left me alone when I bought my Hello Kitty toaster. They just wanted me to conform. That’s all. It’s cool now.

Hello Kitty items are like Michael Jackson albums. Insanely popular, but nobody admits to buying this stuff. Japan Trend Shop has some new Hello Kitty iPhone 4 cases which are officially licensed from Sanrio. These cases are available in four styles.

You can get Bad Dots, Candy Pop, All Gray and Crazy Color. They cost $98 each, which is insane, but it’s not like you will admit to the purchase anyway. Just go ahead and buy a few. No one will know. 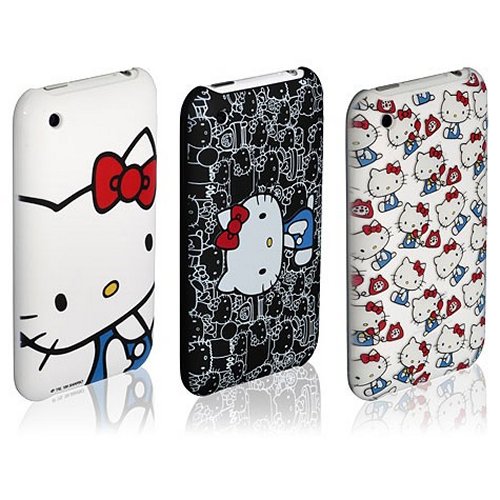 Hello Kitty fans certainly have their pick of gadgets with the Kitty’s image on them, but these Hello Kitty cases seem to stand out. Fans of the kitty will want to grab these up.

I’m not sure how many lives the kitty has used up thus far, but isn’t time for a new cute kitty? I think so. 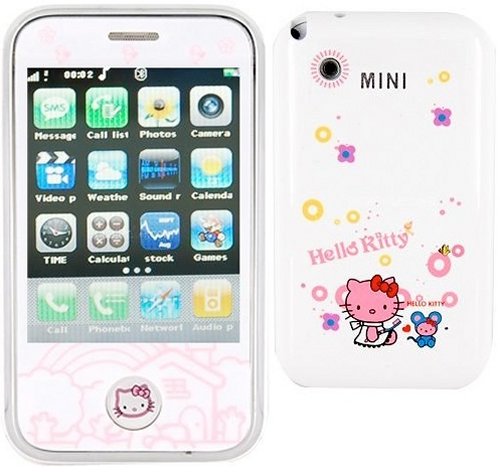 There are two things that China is great at producing, Hello Kitty items and popular knock off gadgets. Well now you can get all of your Hello Kitty branded cellphone knockoffs on a one stop shop that sells them all.

HelloKittyPhones.com sells just about every Hello Kitty cellphone that there is. Even this one that looks a lot like an iPhone. It’s called the Hello Kitty Phone 3G and the price ranges from $89 to $109. So if you love Hello Kitty branded on a knockoff cellphone, you’ll want to visit.

END_OF_DOCUMENT_TOKEN_TO_BE_REPLACED
Posted in Concepts by Conner Flynn on December 1st, 2008 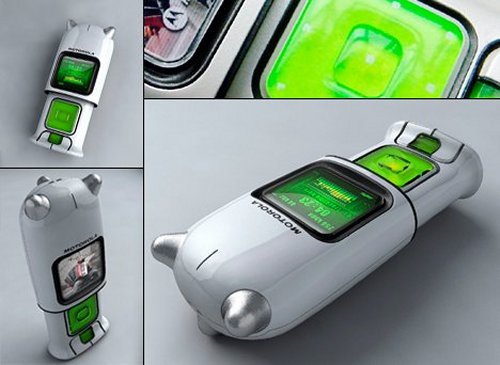 This concept Motorola handset likes like a kick-ass robot Hello Kitty demon that has arisen from the ashes of it’s own hell-fire. It’s here to chew bubble gum and kick ass. It’s all out of bubble gum.

Take this Hello Kitty fans. This thing will kick your thing’s ass. It will eat Hello Kitty, poop her out and repeat the process all over again. It features a very limited button selection, camera, color screen, and hiding feature. It’s the “Cute Phone!”. I don’t know about that, but it’s pretty damn freaky. And I hope to God it can help rid our world of Hello Kitty. Pray with me.

Snoopy fans will love this iPhone case. Not a Snoopy fan? Well, we can all agree that it beats Hello Kitty right? Of course it does. This Snoopy iPhone case shows Snoopy walking on the moon in a space suit. I guess he forgot to bring his pal Woodstock.

This Snoopy iPhone 4 Jacket will cost you $32.99. It will show off your love for Snoopy every time you use your phone. 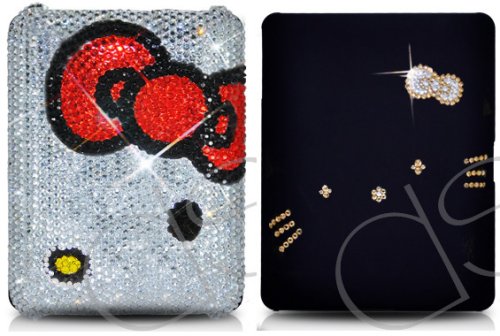 Here’s something for the geeky gadget girl who has everything and is now buying it all again, but with gaudy crystals. Distinctive Style has an assortment of iPhone, iPad, Blackberry, iPod Touch and other cases that are covered in Swarovski crystals. Of course many of them are Hello Kitty designs. 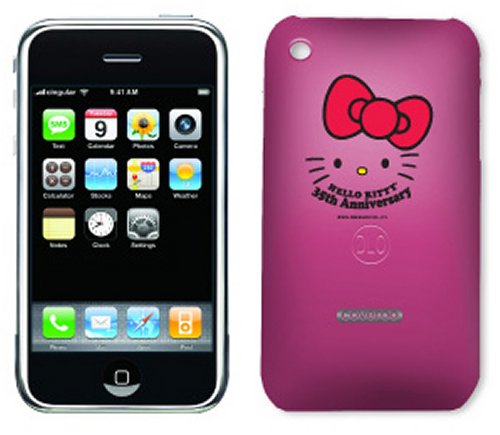 Hello Kitty is 35 now. Not sure what that is in cat years, but if you like you can celebrate her 35th anniversary with Coverco’s range of customizable battery doors for a bunch of cellphones.

Of course it features the face of Hello Kitty herself looking creepy as ever and you can even have some custom text if you want. If you have an iPhone, you can print the design on a bunch of cases and skins for an extra fee. Prices start at $35. 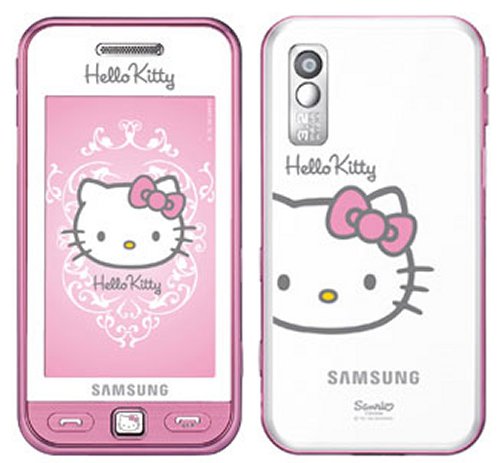 Folks in Belgium will soon be invaded by a new pink menace; the new Samsung E2210 and Star Hello Kitty edition. At that time all of their teen girls will be enslaved into the Hello Kitty cult. The Earth will turn pink as they hold their phones skyward and send the signal that will summon their alien/cat master. And then she will come. God help us all.

The E2210 will retail for $100 and comes in a white and pink theme. The touchscreen-enabled Star comes in a similar color combination, it just has a higher €169 price tag. Specifications and features of both handsets remain the same.

END_OF_DOCUMENT_TOKEN_TO_BE_REPLACED
Posted in Headphones by Conner Flynn on August 23rd, 2009 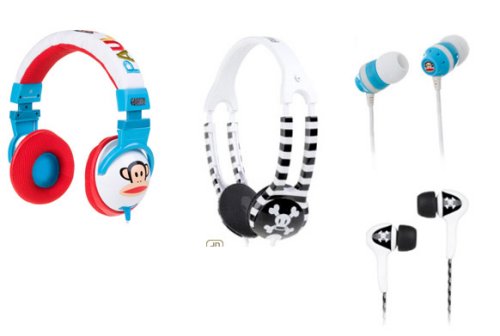 If you have a Paul Frank iPod case, you might want to think about matching it up with a pair of these Paul Frank headphones and earphones. The way we see it, there’s either Paul Frank and his monkey, or Hello Kitty. Which side are you on?

Paul Frank and Skullcandy have teamed up for this artists series of headphones and earphones featuring Paul Frank’s Julius and Scruvy characters. They are available in different funky colors and shapes. The prices range from $21.95 to $54.95. 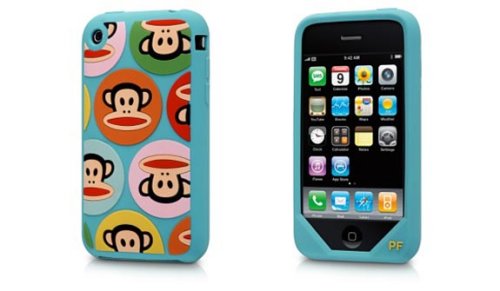 You might remember the Paul Frank iPhone cases that we featured previously. Well, here are two new versions that are available, if you like to accessorize with the famous monkey.

END_OF_DOCUMENT_TOKEN_TO_BE_REPLACED
Posted in Hello Kitty by Conner Flynn on May 10th, 2009 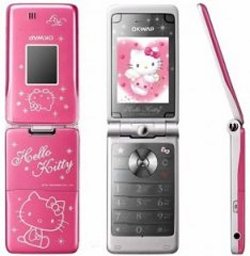 No one takes Hello Kitty phones seriously. At least, until now. The Hello Kitty OKWAP A316 offers 3G connectivity in addition to GSM tri-band 900/1800/1900 support. An actual serious phone with a pink kitty, that will still go with your Hello Kitty purse.

Aside from the specs above, it’s pretty ordinary, featuring a 2.2″ LCD display, a 2-megapixel camera, and up to 2GB of external memory. A built-in MP3 player and Chinese/English dictionaries will help you buy even more Hello Kitty stuff when abroad. It also features a built-in Hello Kitty menu with animations, wallpaper and ringtones.

END_OF_DOCUMENT_TOKEN_TO_BE_REPLACED
Posted in Microsoft by Conner Flynn on April 28th, 2009 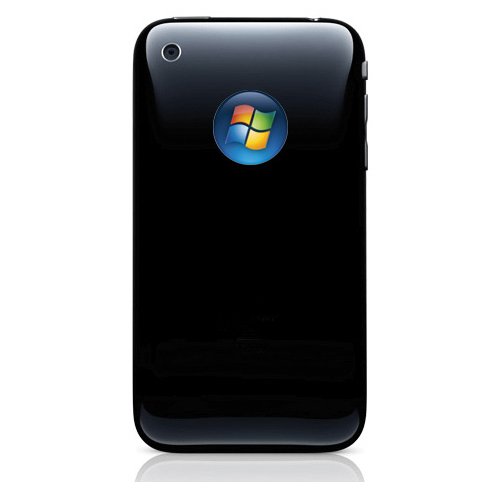 Here we go. Yet another iPhone killer. How many does that make? If the Wall Street Journal’s report is to be believed, Verizon is currently in talks with Microsoft regarding a project with the codename “Pink”. Pink will be a Microsoft-designed iPhone rival with a multimedia focus and, very likely a big touchscreen.

According to the report, Microsoft’s version of the iPhone will also feature a tweaked version of Windows Mobile OS with “new software capabilities.” Microsoft is apparently involved with the design of the phone, while a third party will build it.

The Paul Frank monkey is almost as pervasive as Hello Kitty. I’m not sure which to fear more. But I know that one day they will fight it out Aliens VS. Predator style and we will then know our new master.

Until that day, the merchandising train keeps rolling along. This Paul Frank Monkey shaped mobile phone is not an official product. It’s a clamshell phone with one eye that works as camera. It’s a pretty basic phone that features a 1.6 inch TFT display screen, 1.3-megapixel camera, FM radio, Bluetooth, music player, stereo speakers and a microSD expansion slot.