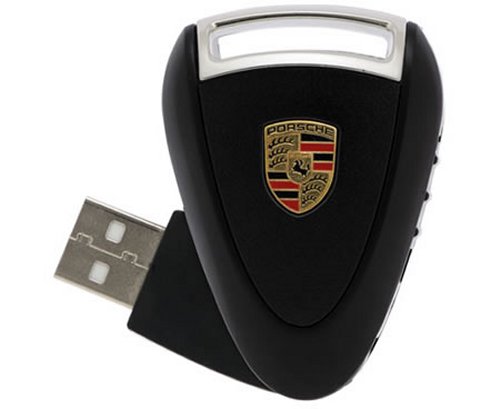 Many of us would love to own a Porsche, but not all of us can afford one. The next best thing may be this Porsche flash drive. At least it’s something to flash around so you can pretend you own one.

The drive offers 2GB of storage, which should be plenty of space for Porsche pictures and other important data. Of course it features the brand logo embedded on it. It will cost you $49 and leave you feeling completely unsatisfied because you are still no closer to the actual car. 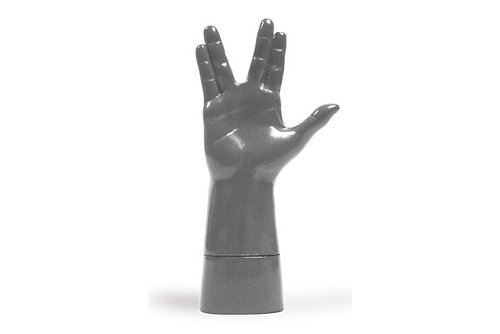 Seems like we have more data than a Borg ship these days, so one Star Trek flash drive is not nearly enough. So you need this Vulcan Live Long and Prosper 2GB flash drive as well.

You do want your files to Live Long and Prosper don’t you? The IMM Vulcan USB 2GB Flash Drive retails for $35.99. You must have one. Because the needs of the many outweigh the needs of the few. Or the one…And a bunch of other crap that Spock said.

Need a flash drive that goes beyond the call of duty as far as durability? Corsair has launched the new Flash Survivor USB drive with 64GB of storage that might interest you. The drive is ensconced in an extremely strong CNC-milled, anodized aircraft-grade aluminum to protect your important data.

The Corsair Flash Survivor 64GB USB Drive is also water resistant up to 200m, should you find yourself in the water during one of your outdoor adventures. No pricing or availability info yet, but this is a good one for all of you Indiana Jones types. 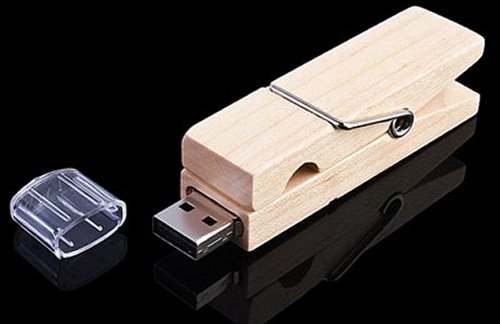 The Clothes Pin USB drive is a handy drive to have. You can hang clothes on your clothesline with it and store your data. But you can’t do both. It won’t hold your clothes while in the USB port and it won’t save your data while drying your shirt in the wind.

But USB drives that clip to things are pretty convenient. It can hold your data while holding say, money, important papers…Could be used as a unique tie clip. Just don’t drop this into a pile of your mom’s Clothes pins. 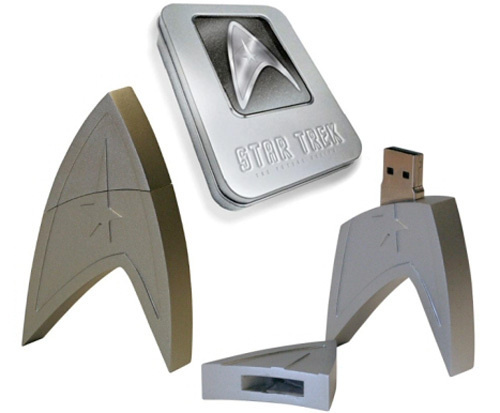 The drive is loaded with DRM, but you can run it on 5 registered devices and burn it to DVD, so that’s not too bad. It will cost you $29. Not sure what that amounts to in Starfleet credits, but it seems like an okay deal. 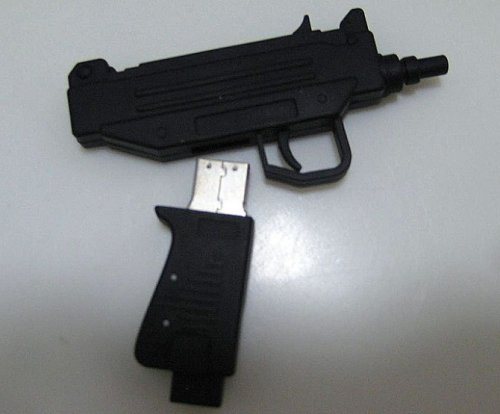 We’ve seen a Ninja weapon in USB drive form, so why not an Uzi. Of course the drive is in the clip. Where else are you going to load and reload data from?

This bad boy comes from The Get Busy Committee, a rap group who stuck their upcoming album “Uzi Does It” on uzi-shaped flash drives. Pretty clever marketing. I’ve never heard of them and it has me talking about them. This kind of music marketing gives a new spin to the term “Number one with a bullet”. 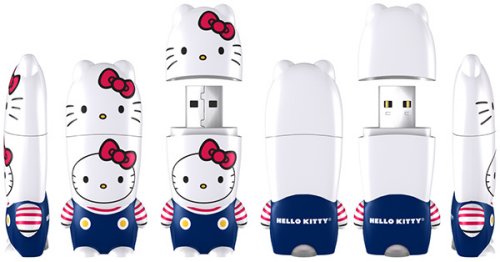 These Hello Kitty Mimobots look absolutely terrifying when there are several together. They travel in packs you see, seeking out your USB port so that they can feed on your files like cute feline vampires in overalls. They are evil and I’m scared. These are in celebration of Hello Kitty’s 35th anniversary.

Sanrio and mimoco got together one stormy night and brainstormed over what kind of creepy thing they could do next. This is their Frankenstein creation. A 2 GB flash drive sells for $25, while the 4 GB version sells for $35 and there’s an 8 GB version that sells for $50. 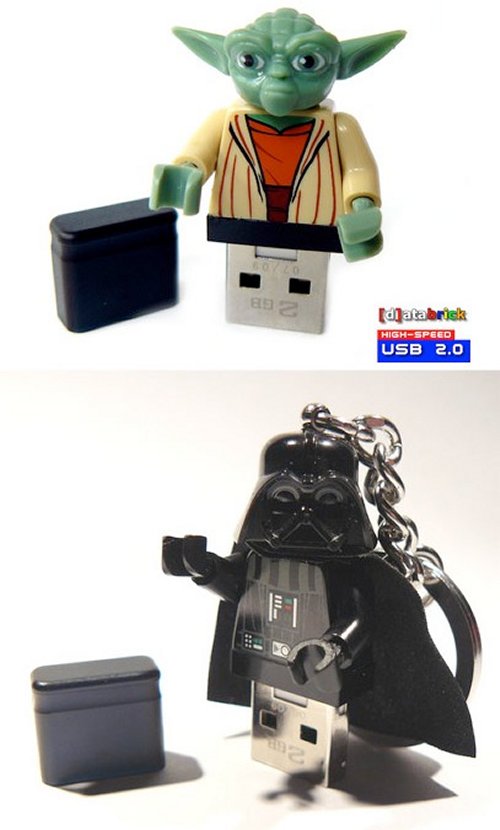 We love Lego. We love Star Wars. We also love USB gadgets. Combine all three and you have an instant classic with these Lego Star Wars USB Memory Sticks. These come from an Etsy user from Munich, who has created a whole line of Lego USB peripherals.

Yoda is available along with Darth Vader, and a classic Storm Tropper. They’ve also transformed other Lego bricks into USB keys as well. These cute little mini fig drives will cost you $59.95 and hold 2GB to 4GB of data. 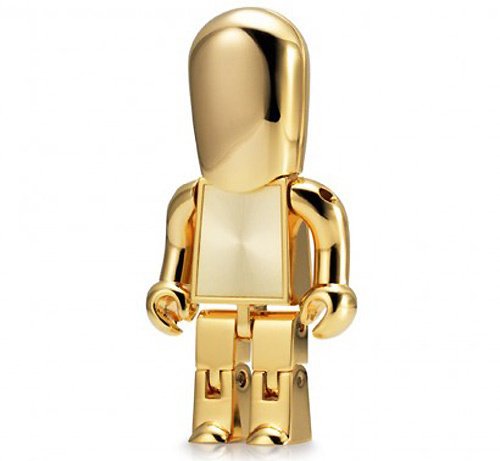 This guy makes quite a statement no? Rumor has it that a UFO Landed in 1947. A ramp unfolded. A door opened. And from the bright light and smoke, the USB man emerged, making contact with humanity. He is a race of 1. He is stronger than you, shinier than you and your wife is now his.

Beer courses through his veins and he pees a chemical compound that will fuel our civilization and end the energy crisis forever. Just because he can. The first human to see him reverted back to a primate state, approached by bounding on all fours, let out a chimp screech and knocked on his shiny exterior before quickly scurrying away. He’s that awesome. 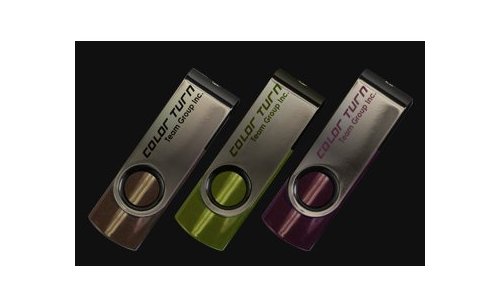 Team has announced a new series of Flash Drives called the Color Turn that they hope will stand out. The drives are available in 2GB, 4GB, 8GB, 16GB and 32GB capacities. They feature a cap-in-body design and a USB 2.0 interface, with maximum read and write speeds of 15MB/s and 8MB/s.

Each drive measures just 55mm x 16mm x 9.1mm and weighs in at 11 grams. These are compatible with most operating systems including Windows ME, Windows 2000, Windows XP, Windows Vista, Linux 2.4 and Mac. No word on price or availability just yet though. 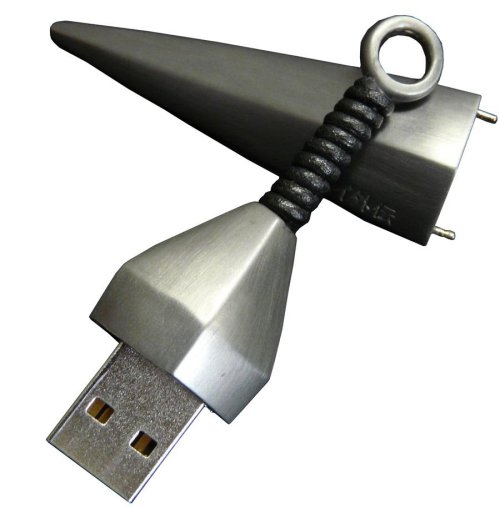 A Kunai is an ancient weapon used by ninjas, so modern Ninjas will surely want their USB flash drive in the form of a Kunai. But times have changed. This version won’t kill, it just holds your precious Ninja data and ancient secrets.

The drive comes with 2GB of storage space and will cost you about $125, which seems just a bit excessive considering the capacity. Maybe Ninjas get a special discount, but I doubt it. 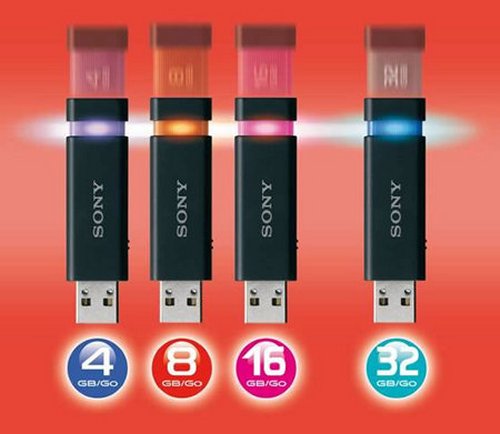 The Sony 32GB MicroVault Click is a tad different. It has a simple, yet elegant design. It doesn’t even have a cap to lose and features trouble-free plug & play operation.

Different capacities have different colors and with the Virtual Expander data compression software that comes pre-loaded, you can store more than the allowed space, tripling capacity. The Sony 32GB MicroVault Click comes in 4GB, 8GB, 16GB and 32GB capacities. 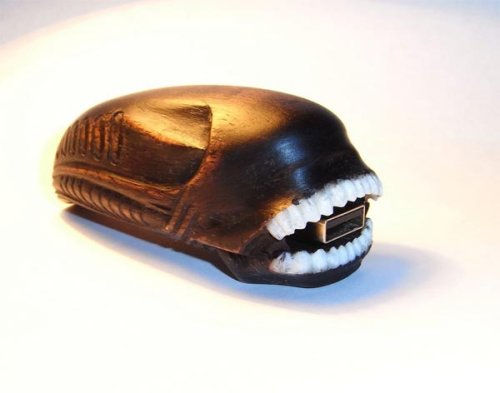 This Alien USB Drive made by Etsy seller MikaEle is hand carved from wood. We love the detail, especially the realistic looking fangs. The USB connection slides in and out with the push of a button so you can display him when not in use.

It comes with 4GB of storage space. If you want it you better be quick, it’s one of a kind, which is why it’s priced at $155 over at MikaEle’s Shop on Etsy. Sure, that’s a lot of dough, but we’re talking an Alien head here. 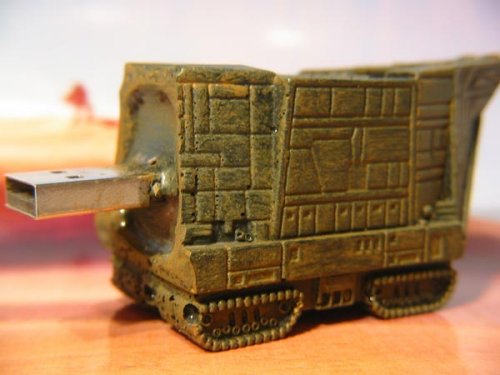 Two new huge Sci-Fi vehicles have now been scaled down to flash drive size for your amusement. The Jawa Sandcrawler from Star Wars and the Borg ship from Star Trek. There’s no room inside for droids or Borg, but this pair will hold your data.

These drives feature 2GB of storage, and are compatible with PC and Mac. They were created by Etsy seller Jasons Creations for $25.00 each. If you think that resistance is futile, then head on over and buy one now. 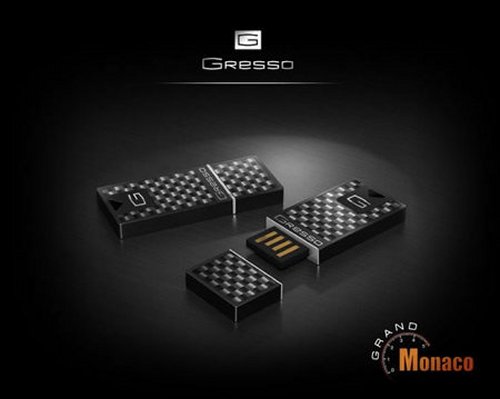 If you love racing, you’ll love the Gresso Grand Monaco USB flash drive. If you can afford it that is. Hopefully you don’t have Formula 1 taste with a go-cart budget as 32GB of storage space will cost you $200 for the Classic model.

The Double Security model will set you back $500. They’re constructed of titanium superalloy and high-tech ceramic. Whether you want the Double Security or Classic designs, both feature carbon inserts for that luxury flair.