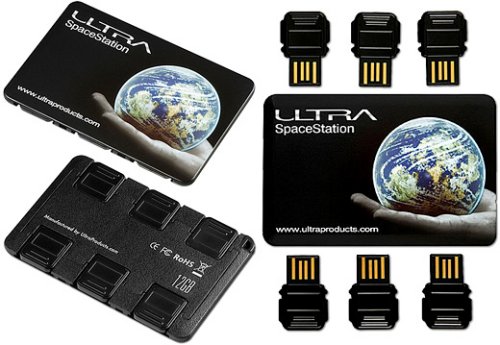 If organization is your thing, you’ll love the SpaceStation from Ultra. Many of us have several various sized USB flash drives sitting around everywhere. Chances are, they aren’t labeled so it’s a mess. The SpaceStation will definitely solve this problem with 6 individual USB flash drives in a credit card sized package. It also includes a set of labels, thereby making your organization complete.

You can get the flash drives in either 1GB or 2GB capacities giving you a total of 6GB or 12GB. Some included labels are for music, videos, games and work. This will help you know where everything is at, which will save you time. Plus you get a pretty credit card sized picture of Earth. What more do you want?

Corsair is set to roll out to computer users a new 16GB “high performance” USB flash drive. It is called the Corsair 16GB GT Flash Voyager and pricing will be around $170. 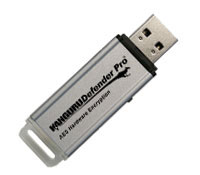 Having a USB flash drive which is tamper proof and hardware encrypted can be a good thing for those paranoid about their personal or business data. To that end Kanguru Solutions is introducing the Kanguru Defender Pro, priced at around $130 maximum for a 4GB flash drive.

The Kanguru Defender Pro comes in 1, 2 and 4GB storage capacities and looks like your typical USB flash drive. Kanguru says this drive differs from others in that it offers “high-level” hardware AES encryption and an aluminum casing which is reportedly rugged and tamper proof. This casing makes it much more difficult to remove the drive’s chip without it breaking and becoming unreadable. 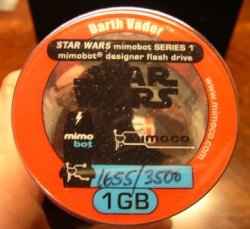 Star Wars USB drives are not new. We’ve covered them before, but now there are some limited edition versions that have Star Wars content pre-loaded on the drives themselves. Content like six trailers, wallpaper, icons, avatars, and sounds. They come in an assortment of characters like Darth Vader, Chewbacca, Stormtrooper, R2D2, Luke Skywalker, Boba Fett, Princess Leia, and Han Solo.

These are available for preorder now from 1GB to 4GB with prices ranging from $49.95 to $124.95. The fun doesn’t end with the USB drive, they also throw in some fun mimobot stickers and a small carrying case is included as well. 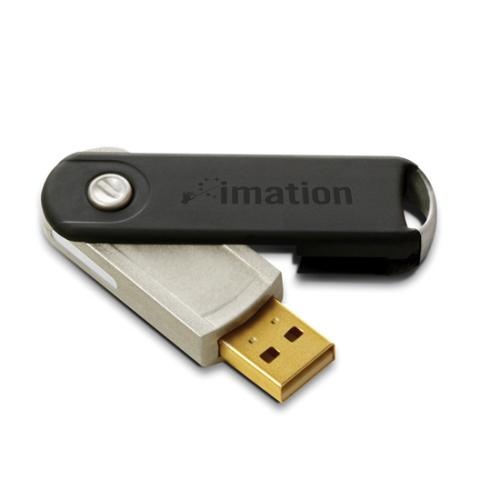 Imation has being showing around at CES its updated line of secure, rugged Pivot Flash Drives. Two models make up this family – the Pivot and Pivot Plus – and they range in price around $70 to $250.

The Imation Pivot drives come in storage sizes ranging from 1GB to 8GB. The more basic model is described by Imation as having “an enhanced design and security features,” meaning it offers up encryption software and a tamper resistant design. It’s also enhanced for Windows Vista ReadyBoost.

Among the many cool things Sony is showcasing this year at CES one of the smaller items not to be overlooked is the addition of a new style of Microvault USB flash drive. This new drive has a new “Sony”-style look to it with a flat black finish and a glowing Orange LED section towards the back end letting you know when the drive is connected and active.

The new USB 2.0 compliant Microvault comes in capacities from 1GB up to 16GB but probably the most significant feature of this otherwise uneventful USB drive is the clicking action. The is no cap to protect the USB connection because the connection will actually retract back into the case when the other side is clicked, much like a retractable pen. Clicking it again extends the connection for use in a number of compatible devices. Also, according to Sony, simply removing the flash drive will cause the USB connection to automatically contract. We’re guessing it’s due to friction when pulling out the connection.

If you carry your personal data such as emails and contact information between multiple PCs, you know how much easier it would be if you could keep it synchronized between the different machines. Kingston Technology is unveiling a new USB flash drive at CES, the Kingston Data Traveler 400 (DT400), aimed at doing just that.

The Kingston Data Traveler 400 (DT400), available in storage capacities up to 8GB and starting pricing at around $31, is a USB flash drive which comes pre-loaded with with MigoSync data synchronization software from Migo Software. This software allows one to work among multiple PCs by directly synchronizing files, email and Internet browser settings onto the drive. 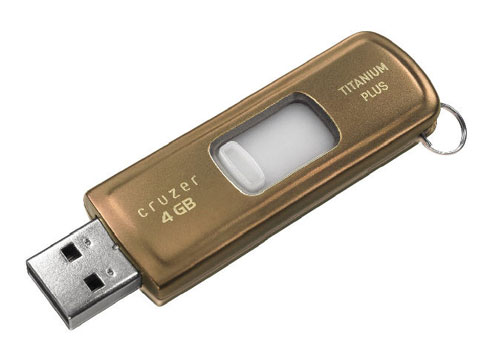 The beginning of a new year signals the event most consumer electronics geeks have been waiting for: the Consumer Electronics Show. We’re planning on putting a lot of coverage on this exciting event, including the creation of a category from which you can get the latest news on product announcements. We kick off this category with pre-show announcements – the first of which is a new USB flash drive from SanDisk which will offer automatic online backup of its data.

The SanDisk Cruzer Titanium Plus, priced at around $60, will offer an online backup service compatible with Windows and free for six months before having you incur a $30 a year charge. The 4GB USB flash drive will, after having new files copied to it, automatically back them up to an online account created by the user. An Internet connection is required of course and if one is not available the drive will wait until it detects a live connection through its host computer before backing up new files.

Remember those cute little RIDATA YEGO USB drives we highlighted earlier this year? The company is back again today with news that these linkable devices, each sporting two additional USB ports, will be available shortly in a new 8GB capacity.

The RIDATA YEGO drives, currently available in capacities ranging from 1GB to 4GB, acts as a USB hub via the two USB ports built into its limbs. These USB 2.0 drives also feature what is called “advanced partition and security functions” so one can create password protected areas for storage of important files. 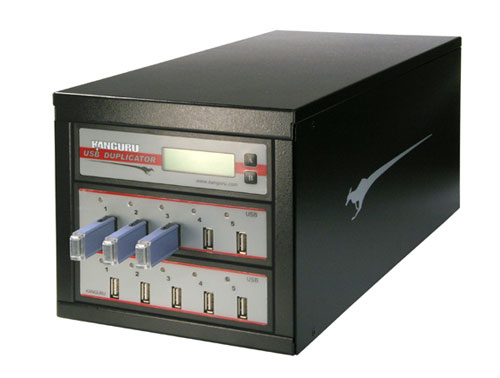 You, for some reason, need to copy files to upwards of 24 USB flash drives at the same time. You could do it one at a time, but that would be like pulling your teeth out with a wrench. Kanguru has unveiled a new copying device which will let you do that mass USB flash drive transfer – the Kanguru USB Duplicator.

The Kanguru USB Duplicator lets you mass copy files to either nine USB flash drives or 24, depending upon the configuration. It supports USB 2.0 and has eight main function modes for copying and verifying data. It can also work with USB hard drives. 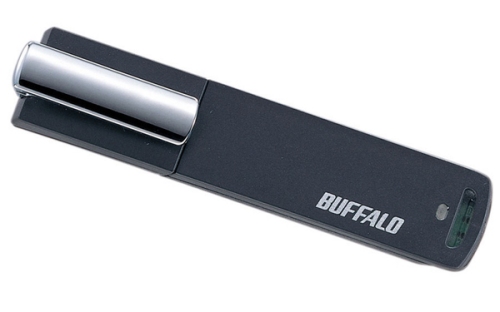 Buffalo has announced the release of a new flash memory stick that can hold up to an impressive 32GB of data. Your first thought might be to wonder just how long it takes to transfer 32GB of data to the drive through USB. Although it still might not be real quick Buffalo is assuring us that their TurboUSB technology will get the data onboard 20% faster than a standard USB drive.

Since the value of the data stored on a drive usually increases with the amount of data the company has added a little clip to give a little help against losing it and also has a manual “lock” switch to protect the data from being overwritten. The drive will work with just about any OS but Windows users can take advantage of software that will automate backups and provide a password-secured portion of the drive for storing private info. 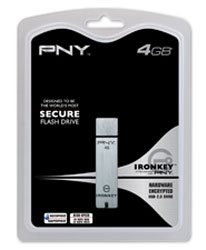 PNY Technologies, a maker of computer memory products, and Ironkey, a developer of computer security products, are teaming up to create a co-branded USB flash drive for retail. The new PNY 4GB IronKey Secure USB Flash Drive is priced at around $150.

The PNY 4GB IronKey Secure USB Flash Drive offers up a variety of measures to protect and secure your data. These include Internet authentication software, private web surfing, data backup, government-level AES “always on” encryption and a durable body design.

EDGE Tech is out today with a large capacity USB flash drive. The new EDGE Tech 32GB DiskGO Flash Drive is priced at around $400.

The EDGE Tech 32GB DiskGO Flash Drive is capable, according to EDGE Tech, of storing more than 21,000 pictures, 32 hours of video, 8,000 songs, or 320,000 documents. This USB drive is capable of a transfer rate upwards of 480Mb/second and comes with a preview version of some encryption software.