Posted in Robots,Webcams by Conner Flynn on October 2nd, 2007 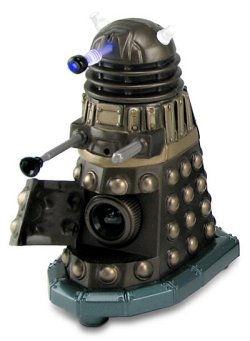 This is the perfect accessory for any Doctor fan. Robot fans in general will appreciate this new Dalek with a webcam inside. This has got to be one of the coolest webcams ever. Aside from being bent on robot domination, this Dalek is also plug and play, with LEDs that let you know when it gets powered on. Just open the lens door to expose it’s hidden watching eye. A built in microphone allows you to send sound along with your video. You know, in case he creeps you out and you need to call for help.

Here are the specs: 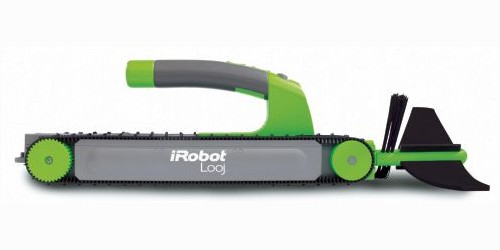 You have to admit that cleaning out gutters on your house in not an enjoyable task, and how cool would it be if you had some remote controlled robot that would clean them out for you? Well, we can think of a lot of little chores that a remote controlled robot would be handy for but that doesn’t mean anyone is going to make them. That’s why we were a little surprised to see this new gadget join the ranks of the iRobot crew. 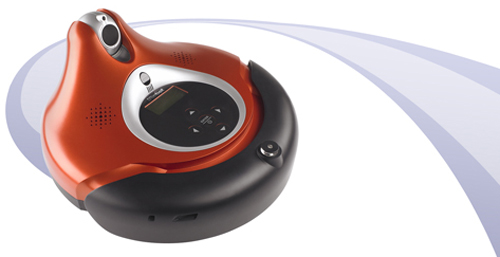 With the ConnectR virtual visiting robot as your proxy, you can now hear, see and interact with someone far away using internet connectivity. The device is easy to set up, use and maintain and provides Privacy and internet Safety features to restrict access or shut down audio, video or both when necessary. Up to ten PINs can be used to access the robot to facilitate multi-user one-at-a-time visiting privilages. iRobot has had some pretty trippy ideas, but this one is the trippiest yet.

The high quality two-way audio/video camera makes visiting easy providing wide angle and 16.7x zoom with 220 degrees of tilt for total control over video image. The robot can be controlled remotely from a computer connected to the internet or by remote control or joystick to allow the visitor to virtually participate in the activities of the host party. 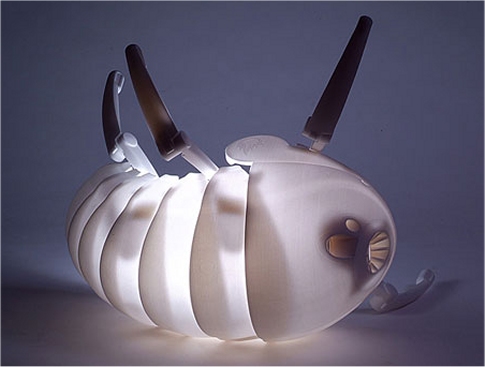 Researchers at the University of Magdeburg-Stendal in Germany are coming close to replacing the poster-animal of fighting forest fires from Smokey the Bear to a robot beetle. The OLE beetle would be used to patrol a large area of forest on its own using infrared and biosensors to detect fires in their early stage. Once detected OLE can move towards the fire as fast at 20km/hour depending on the terrain to report the location of the fire and attempt to put it out using an impulse appliance. 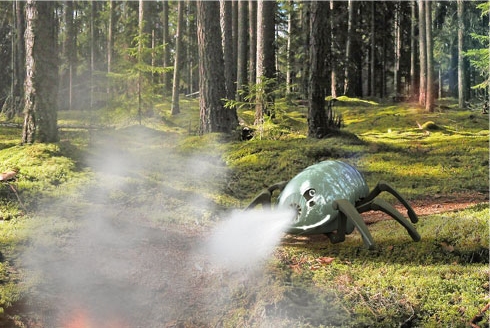 I’ve gone on the record before that I think Hello Kitty is just wrong. Today I bring you more proof that something evil is behind this Japanese sensation: the Hello Kitty Robot. Clocking in at 52 cm tall x 39 cm wide x 33.3 cm deep (including the tail…yes, there is a tail), the HKR will provide the love for your child that you can’t because you’re too busy working to pay off the robot’s $6,299 price tag. No, that’s not a typo: this thing costs a penny under $6,300.

It’s head and arms move. It has a CMOS sensor cameras in its cold dark eyeballs. It has voice recognition software so it can respond specifically to your child’s cries for affection, compassion and understanding. It can recognize when it is picked up. It has an ultrasonic sensor too but for … 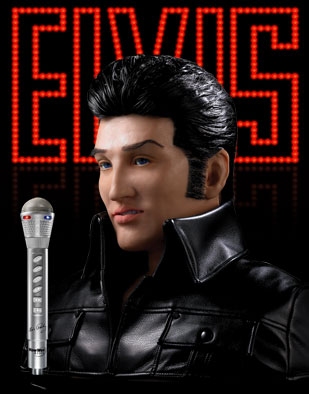 You may remember seeing this slightly disturbing animatronic robot of Elvis Presley from WowWee shown off at CES 2007, and now you can get your own to take home and sing with ’till your tender hearts’ content. You won’t be seeing any Blue Suede Shoes though since this singing robot is only a life-size bust replica of Elvis Presley and comes complete with microphone, which is actually a wireless IR remote control.

Using the microphone remote you can control the Elvis robot in four different modes. The “Alive” mode is for conversation, “Monologue” will have Elvis tell you stories, the “Song” mode will bring on one of eight songs and of course our favorite “Sing Along” lets you sing with the King, karaoke-style (you’ll need your own mic). Be sure to check out the video below. 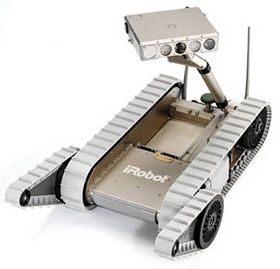 Uh oh. Science fiction writers and directors have mined the idea of a robot revolution for decades, producing such classics as the “Terminator” film series. Doomsayers will take this next bit of news as evidence for humanity’s downfall as the Taser International corporation announced that it has teamed up with the iRobot Corporation to produce a new line of robots capable of delivering a shock charge to people.

These taser-equipped sentries will be sold to the military and police forces in the hopes of being used in a situation where non-lethal force is required to subdue an opponent. A human operator is still necessary to give the robot a command to subdue someone but already critics are warning that the day may come when the robot’s software is smarter and it doesn’t need a flesh … 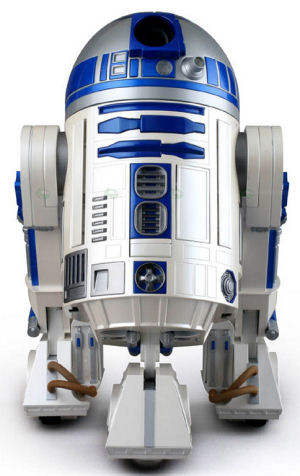 This is for that “Star Wars” fan you know that has already collected everything and we admit too that we would love to have it in our home theater room. Behold the R2-D2 video projector and DVD player, the perfect way to experience all six films in George Lucas’ sci-fi epic.

This rec droid measures 341x328x519 mm and weighs 8 kg. The DLP projection, which shines through R2’s main optic eye, produces 1800:1 contrast and 1500 lumens of light output. The dome head moves side-to-side, its legs move back and forth and it can be positioned on its wheels to find that perfect view. Video/audio ports are concealed in the back of the robot via a panel, but what really elevates this to must own status is the iPod docking slot under a front panel and the Millennium Falcon remote control that … 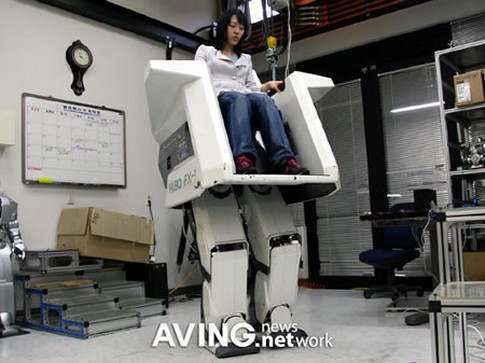 We write about robots quite a bit here on the ‘Brick because, well, robots are cool. And like everything else some robots are cooler than others. The Hubo FX-1 two-legged chair robot ranks right up there towards the top with us.

This ‘bot is a chair with two legs controlled by a joystick that lets you walk around while seated. The video shows someone sitting in it to control it walking forward, backward, side to side and turning. Currently it appears to be tethered for power but most likely the intention would be to have it run on batteries.

The real question would be whether or not this walking chairbot can handle rough terrains and stairs. If not, and I’m no robot designer mind you, it might make sense to design a powered chair with, … 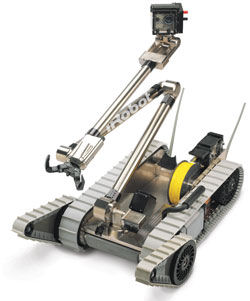 If you didn’t already know, the military has been using iRobot’s services for the wars in Afghanistan and Iraq, sending versions called PackBots specially made to sniff out IEDs and do scouting in dangerous places so that real humans aren’t in danger.

With over 900 PackBots sold and in use so far the iRobot Corporation and Boeing are teaming up to create a new next gen robotic scout that will serve in the military as well as private sectors. Dubbed the Small Unmanned Ground Vehicle (SUGV) Early, this little droid will weigh less than 30 pounds, allowing troops to pack it into remote regions and then scout out areas for any enemy combatants or to map the terrain before moving troops ahead.

iRobot will design, develop and manufacture the Early robot while Boeing lends a hand with systems … 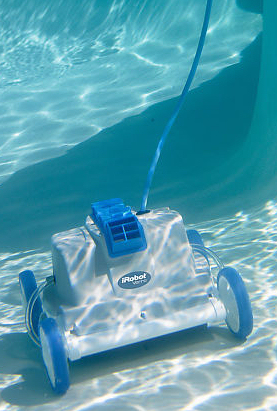 Just in time for the summer the futuristic sounding iRobot Corporation has introduced the iRobot Verro Pool Cleaning Robot to make your dog days that much easier to get through. These people are the same ones that brought us the Roomba, so they probably know what they’re doing putting a semi-intelligent electronic device into the water with you.

After unpacking the robot you toss it into the pool where its vacuum starts to clean all that gunk left behind by you, like human hair, as well as the stuff dropped off by the wind that collects at the bottom of your pool.

iRobot claims that their two models, the Verro … 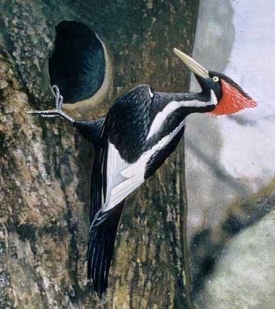 The Ivory-billed Woodpecker has long been considered by bird-watching enthusiasts to be “The Holy Grail” of bird watching. The bird is an extremely rare member of the woodpecker family, and is officially listed as an endangered species and even considered extinct by many people.

The Ivory-billed Woodpecker made headlines back in 2004 when a kayaker in Arkansas reported seeing one. In 2005 a team led by the Cornell Laboratory of Ornithology also reported spotting the elusive bird. In September 2006, a team of ornithologists from Auburn University and the University of Windsor also published a paper detailing evidence for the existence of Ivory-billed Woodpeckers in northwest Florida. In 2006, a $10,000 reward was offered for any information that leads researchers to an Ivory-bill nest.

In order to get conclusive evidence that the Ivory-Billed is not extinct, scientists … 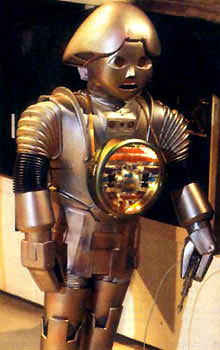 European scientists think they may have an answer to the nurse shortage: build robot nurses to replace the puny hu-mon nurses. The robots would perform basic tasks and free up the real nurses to do the important stuff like look hot and give naughty boys shots in the bum or something like that.

Actually, the robots would be performing more of a janitorial function than actual nursing activities. The robots would clean up spills, deliver messages and guide visitors to their beds. Wouldn’t a Roomba, a telephone and some old people be a lot better at this and a lot cheaper? No wonder Europe is such an economic disaster. Their brilliant minds are busy re-inventing stuff Americans can buy on late night TV.

In all seriousness, it appears that … 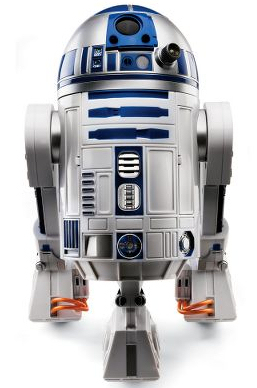 After checking out the Star Wars Exhibit at OMSI here in Portland, curiosity arose as to where a guy could get his own Star Wars items, and our searches brought us at least one reasonably priced droid.

Hammacher Schlemmer has a voice activated R2-D2 droid replica that you can get for about $120 that follows 40 different voice commands and has an infrared sensor to detect objects and movement.

The movement detection can sound an alarm when in sentry mode, and the R2-D2 will make noises and mimic sounds from the original droid and from Star Wars movies.

Not to disappoint after the build up, but this R2-D2 replica runs on 4 AA batteries and only stands 15″ high, so it’s size is nowhere near the original, but it’s looks are very similar and it carries the same attitude … 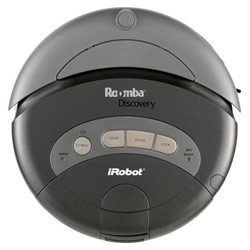 Now is your chance to own your very own Roomba vacuum. The iRobot Roomba Discovery SE is the top of the line Roomba with the very best of features.

The SE features include Dirt Detect, the self-charging Home Base, an extra-large debris bin, the Roomba Remote, three cleaning modes, and a Charging Wall Mount. The SE also includes the Advanced Power System which gives your Roomba the energy it needs to clean up to 4 rooms.

The Advanced Power System provides up to 120 minutes of cleaning power and recharges the battery in 3 hours – 60% faster than the original Roomba.