Posted in Intel,Notebooks,Processors by Darrin Olson on August 28th, 2006 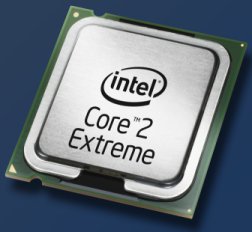 Intel’s latest processor for notebooks, the Core 2 Duo which was previously code named “Merom”, has started shipping in with the leading notebook manufacturers including Dell, HP, Gateway and Apple with the MacBook Pro. This new processor promises 20% more processing speed than the previous Core Duo. So, basically this means that the your notebook battery lasts just as long and your legs won’t melt any faster.

The Core 2 Duo processor can achieve such great speeds because it has 2 processing cores that allow it to do multiple tasks simultaneously. This might make things a little tougher for AMD’s Turon.