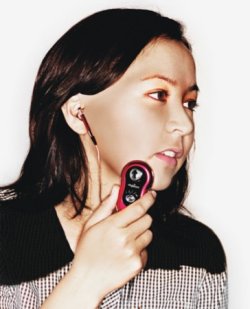 Sure, the world has seen it’s share of goofy MP3 players, but this one really takes the cake. The saying goes “There’s a sucker born every minute…”, but they should have added, “…And some will rub an MP3 player on their face like a Norelco razor”.

The mpion actually claims to fight acne by releasing positively and negatively charged ions, which supposedly neutralize breakouts. It will cost you $184 and only holds 128 megabytes of music, so I’m thinking this is a last resort for the seriously desperate, angst ridden type, who has a terminal case of crater-face. Keep rubbing my friend. Who says wishes can’t come true, if you just believe. I can’t figure out why a young and thin Rosanne Barr is pictured using this. 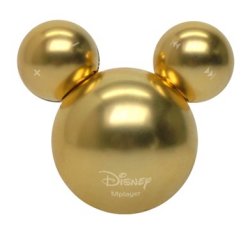 There’s gold in them there ears! iRiver is set to sell what it is calling the “assassin’s mace”. This amounts to a Mickey Mouse MP3 with gold paint on it ala Goldfinger.(Or more recently Goldmember of Austin Powers fame) Mickey fans will want to hurry as it’s only available in limited editions.

The design houses a Philips PNX0103ET sound processor. The ears will control the volume and track menu and it has an internal memory of 2GB. It’s very cute in a “If Mickey were a pimp” kind of way, as well as being simple and it won’t cost you a fortune, at $123. 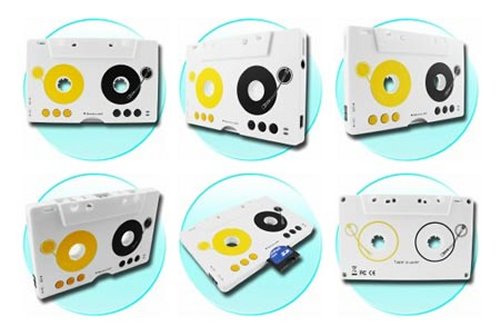 This Cassette looks like it could have come straight out of the 80′s, but it’s also an MP3 Player. It can be used as a stand alone MP3 player with headphones, or inserted into any cassette deck and played that way. It plays the music directly from the SD card that you put in it, so you can’t reverse/skip/etc. when the tape is playing. Pointless, but neat.

Of course if you want different tunes, just load another SD card in it. It will cost you $22 from Chinavasion, and some valuable dignity as you go back to using an old cassette deck. With this kind of backwards thinking, Chinavasion will have an iPod in an old 8-Track tape in no time. 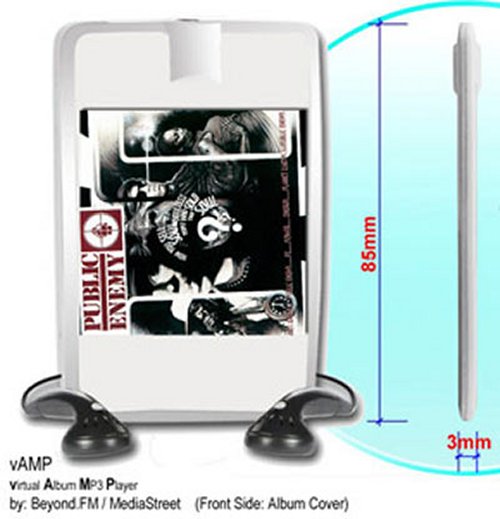 With plummeting CD sales, the music industry has been looking for ways to make more money, despite the fact that they still make a nice profit from the sales of digital media. In between counting their millions and crying crocodile tears, they found an ally in MediaStreet, who have announced the vAMP Virtual Album MP3 Player. It weighs just 0.7 ounces, and claims to be the “smallest, thinnest, fully functional MP3 player” They have high aspirations for it. MediaStreet intends for the vAMP to replace the CD.

The vAMP comes loaded with songs from an artist just like a CD, and even has album art on the front of the MP3 player as well as track listing and liner notes on the back. Inside it has 1 GB of storage, which gives you room to put other songs on the vAMP as well as transfer the ones that are there to your computer. 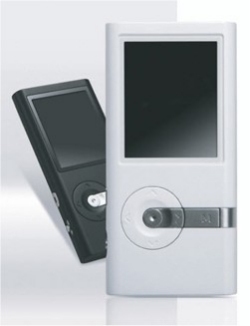 If you’ve been in some quiet anticipation of some pricing and release time frame for that new iAudio U5 MP3 player from Cowon your wait is over. Our buddies over Crave have caught wind that Cowon America has went ahead and already started shipping the U5.

The player is available in a black 4GB model and a white 8GB model for $119 and $159, respectively. Unlike most of Cowon’s stuff, this one lacks some of the frills you’ll find in many other competitors, but it does house a 1.8-inch TFT LCD (no video playback, audio only), an FM tuner that can be recorded, an equalizer, voice recorder and alarm clock.

If you want to get a better idea of the players functionality you can check out Cowon’s video after the jump: 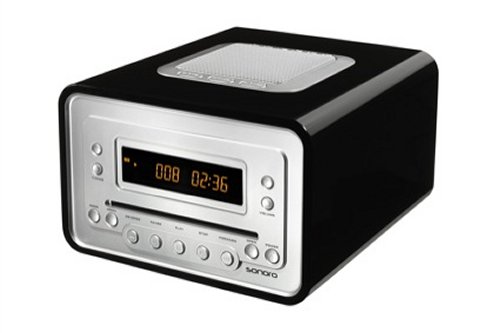 If you are looking for a stylish CD/MP3 clock radio that has quality German design, Sonoro Audio has three new cubos that are launching during CES 2008. These retro looking units are an all-in-one clock that contains a slot-in CD/MP3 player as well as an internal iPod docking station with remote control compatibility and recharge function. It also has that old archaic thing known as AM/FM radio reception.

If you happen to be a fan of radio, they will also be offering a internet/FM radio cubo. It certainly combines form with functionality and they paid attention to design detail. Each of the three cubos are encased in wood in order to provide high quality acoustics. The metal grill located on the top of the product enables upward resonance from its powerful full range speaker. 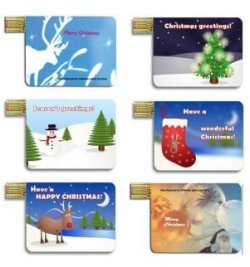 Walletex, the makers of the credit card sized MP3 players now have some neat Christmas versions available. Both Christmas and Hanukkah. The Hanukkah version features a dreidel and candles, while the Christmas version has classic scenes. Just store the MP3 player in your wallet. You could even give them out as expensive greeting cards, by putting photos and music on them.

MobiBLU is no stranger to cube-shaped MP3 players or to small ones but this player brings a little something new, however we’re not exactly sure why. This cube-shaped player has controls on its side for playback of MP3 allowing play, pause, volume control and switching tracks. What’s unique is that it will flatten out into the shape of a cross and then fold back up into a cube.

Where this could be useful isn’t exactly clear. Maybe if you needed to slide the player under a door or through a narrow spot? Also I’m wondering how that headphone jack works when it’s flattened out, or when it’s folded up for that matter. The MP3 Nanum measures just 30mm cubed, connects via USB 2.0, has a 1GB storage capacity and supports MP3, WMA and WAV files. MobiBLUE also shows it being available in colors of red, white and green. No word yet on pricing or how we might get this in the states. 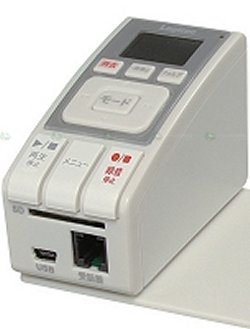 The MP3 Telephone Recorder ia capable of recording up to 50 hours of conversation on it’s internal 128MB flash memory. The recording device fits between the handset and the actual telephone, and gives you the option of manual or automatic voice-activated recording.

Playback is in a non-standard audio format to prevent the unauthorised use by someone other then yourself. Connect it to the PC via USB socket and use a password to access the memory on the device. At that point the software converts the non-standard format into MP3 as the password decrypts the audio stream. 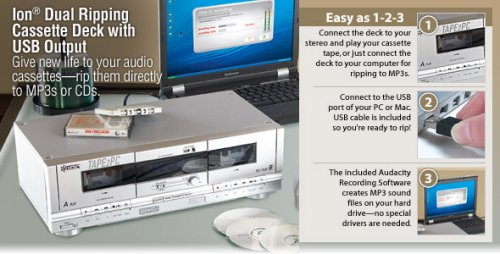 We’ve covered devices before that will update your old-school cassettes to digital, like the plusdeckEX. The plusdeckEX even has a great retro look, but the Ion Dual Ripping Cassette Deck with USB Output beats it hands down for an authentic 80′s design. This dual-ripping tape deck transforms your old cassette tapes into digital files, so you can listen to them on your MP3 or CD player. You won’t have to worry about those old tapes wearing out from years of play.

The device is compatible with both PCs and Macs and even features normal and high speed dubbing for cassette to MP3 conversion. I understand if you don’t want to admit to still using your old cassette tapes, but it’s time to get one of these and upgrade. Haven’t you lived with your horrible secret long enough? 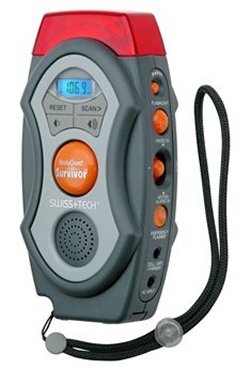 The BodyGard Self-Powered Emergency Tool is like a high-tech Swiss army knife, without all the knives. Consider it the MacGuyver of emergency tools. You get 12 devices in one, along with a hand crank, so you can generate power when and where you need it, on the spot. Never worry again about your flashlight, MP3 player, cellphone or radio running out of juice.

It also comes with a flashing red light, a panic button for emergencies and a motion-activated security alarm that alerts anyone around you in the event of an emergency. They obviously took advantage of every square inch of the device. It even has an integrated storage compartment for pills, matches and other tiny items. 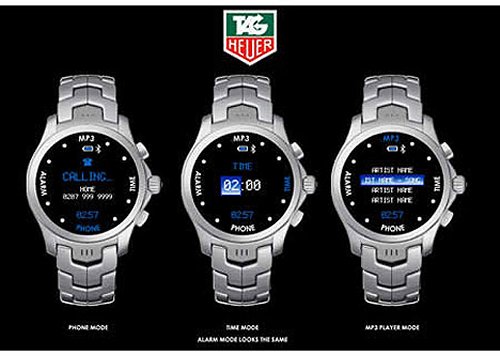 If you like wearing a phone on your wrist like Dick Tracy or Buck Rogers, but hate it when people ask you why your watch looks so strange, you’ll like this new Tag Heuer watch/phone. The watch maker has officially announced the Tag Heuer mobile phones. As far as looks go, it is heavy on the watch side. You wouldn’t know it was a phone at all by looking at it. In fact, the design is 3 years in the making as they wanted to streamline this new breed of mobile phone.

Though it seems that nothing has been finalized yet, it looks like the watches will include a touchscreen display, a speaker and vibrate mode, stereo bluetooth, an MP3 player, and a kinetic power source. 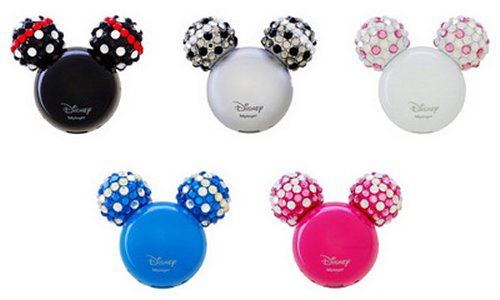 Lately there has been a strange fascination with slapping diamonds or crystals all over our devices. Take the Mickey Mouse mp3 player. For some reason, someone saw fit to cover Mickey’s ears in tacky Swarovski crystals. We’re all old enough to know that crystal in this case is just a pretty word for glass. Even if these were diamonds, it would be over the top.

Iriver’s Mickey Mouse MP3 isn’t new, but the bling is. This was done for the Japanese market. Only 500 units are being made for the new pimped out edition and they are going for 16,800 Yen (about. £75). 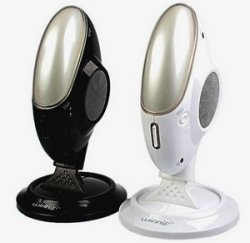 These speakers/moodlight/FM radio are simply way too cool to behold. They remind me of the Easter Island stone heads, you know, if aliens had mated with robots and then made art. For a dock, it really does do quite alot.

Raise and lower the volume by simply waving your hand across the infrared sensor. You can tune the radio by the same means. No need to press any buttons. Of course you can plug your mp3 player into it, or turn on the radio. If you get really bored you watch the pretty mood light glow. 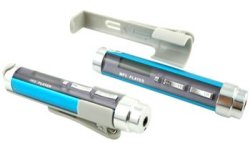 If you needed proof that Star Wars was way ahead of it’s time, here it is. This new Music Stick resembles a small lightsaber. It might even be the most lightsaber like product that is not actually a lightsaber. Of course, it may just be that the manufacturer wants to capture the hearts and minds of geeks everywhere. Either way, this is a slick looking mp3 player.

It features a 2GB or 4GB storage capacity, has a small display for track information, FM radio, voice recorder and a High speed USB 2.0 connection. The formats it supports for playback are MP3, OGG, WMA and WAV (PCM/ADPCM).