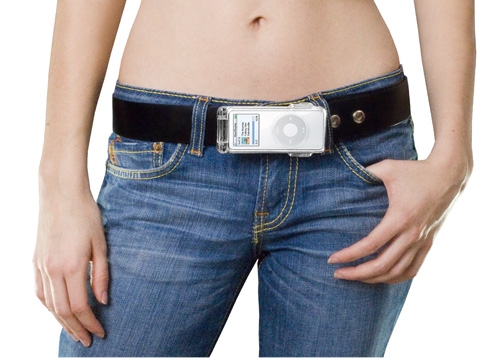 I’m beginning to accept the fact that it isn’t going to end anytime soon, and have just succumb to the explosion of iPod accessories.

This rendition happens to be called the “Beat Buckle” (thank you for not calling it the iBuckle) and is an actual belt buckle that is made from durable clear plastic designed to hold the Apple iPod Nano or iPod Video. A actual belt does not come with the Beat Buckle, nor does an iPod but the case will work with any belt that supports a removable buckle. If you don’t have one Beat Buckle can also sell you a belt along with the case if needed.

The Beat Buckle case has ports for headphones and the iPod functionality is completely accessible when inside and sells for just under $30 USD. 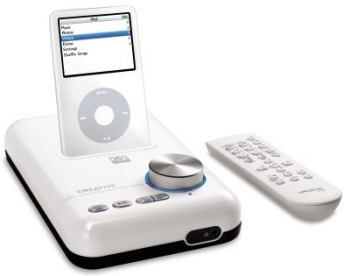 Creative has recently introduced its new Creative Xdock Wireless which works as a docking and charging station for the Apple iPod and plays high quality music in Xtreme Fidelity. This device has actually been certified by the Made for iPod program through Apple.

The Xdock plays the iPod music through X-Fi Wireless Receivers anywhere home (external speaker receivers are sold separately) and up to 100 feet away. The Creative Xdock Wireless can also connect directly to stereo system speakers or to a home entertainment system to listen to music, watch movies or view photos. The Xdock also has a wireless remote which can be used to operate the iPod when docked.

When playing music through the X-Fi Receivers, the Create Xdock can be set in different modes to control different speaker combination. A broadcast mode can be used to send the signal and turn … 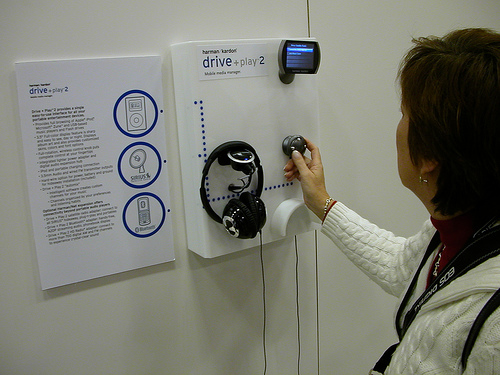 Harmon Kardon, the company known for audio excellence, has released its updated version of its popular Drive+Play device. Drive+Play 2 provides a nice interface for devices like an iPod or satellite radio. The Drive+Play mimics an iPod down to the interface and button. The remote is a 2.4GHz wireless knob that resembles an iPods scroll wheel.

The 3.5 inch display, which mounts on your dash with either glue or screws (yikes), is meant to resemble an iPod screen. The screen supports regular and large font (for those older drivers). The screen is colored unlike the original which had a gray scale screen.

The “brain” of the system can be wired directly to a car stereo system for a permanent installation. If the user isn’t so sure about permanently grafting the device to their car, they … 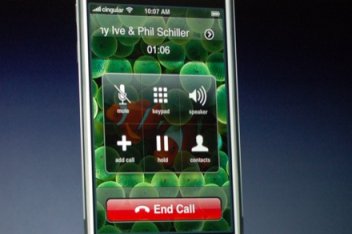 In a move that has surprised absolutely no one, Steve Jobs unveiled the new iPhone during his MacWorld keynote address. The device looks like a PDA and has no permanent buttons.

The iPhone as anticipated by many, and its introduction has raised Apple’s share price.

Jobs made a point to mention how smart phones aren’t very smart because of the fixed keyboard and the space that this wastes on most phones. Jobs also mentioned the fact that you can have visual voice mail, meaning you can view your voice mails like your email inbox.

The phone is a Quad-band device using GSM + Edge and also Wi-Fi and Bluetooth capable. Supposedly, the internet integration with Wi-Fi is very seamless.

Jobs demonstrated the context based screen that changed based on what task was being completed, it would show a dial pad … 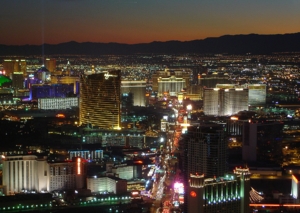 Today was the opening day of Consumer Electronics Show 2007 (CES). As you’ve no doubt noticed we’ve been bringing you coverage and news from the show.

The three day event hosts close to 3,000 companies and about 150,000 people. The show is centered at the Las Vegas Convention Center but it also spills over into surrounding casinos.

The event features speeches by notables such as Michael Dell and Bill Gates. Gates, Microsoft Chairman, gave a keynote that sounded to some like a late night infomercial for Vista, the Zune and its partnership with Ford. Microsoft has positioned Vista to be the center of a home entertainment web that includes Zune and the Xbox 360 which will get the ability to download and and record Television shows. 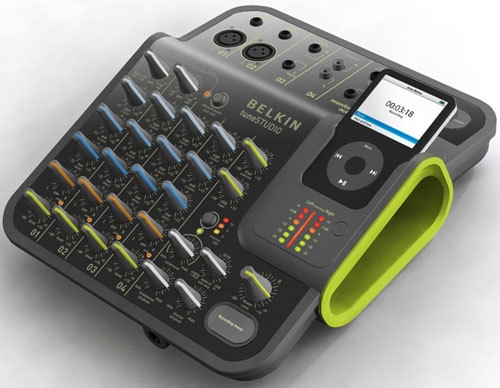 This audio mixer coming from Belkin kicks the crap out of the last mixer targeted for the iPod that we looked at. The TuneStudio is a four-channel mixer designed to use with the 5G iPods, complete with built-in docking station, LED level indicators and XLR connectors.

This appears to be a relatively small, portable recording studio with each of the 4 channels having it’s own 3 band equalizer with pan and level controls. A USB port facilitates transferring data between a computer and the player when docked. The TuneStudio Mixer is expected to be available in the US this summer, followed by Asia, Europe and Australia, retailing for about $180 USD.

The system comes with a docking station for the iPod which includes built-in speakers, and one additional wireless speaker. More wireless remote speakers can be purchased and added on separately. Each remote speaker can be mounted directly on a power outlet or set on a counter top with a cord to be powered.

The wireless connectivity for the speakers can transfer the sound up to 150 feet away, through walls and works indoors or outdoors. There is also a wireless accessory for a weatherproof outdoor amplifier with it’s own volume control to run the sound off of existing outdoor weatherproof speakers. 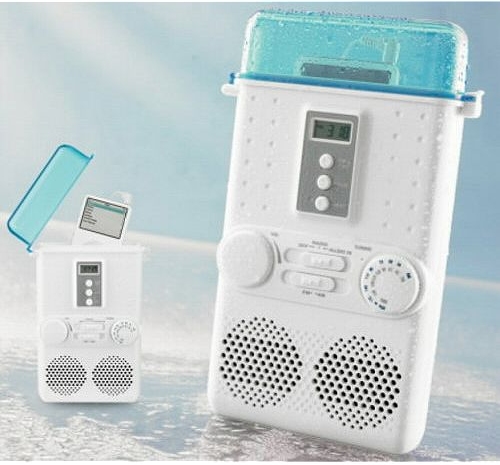 This is yet another iPod accessory that could really work with any MP3 player, but has been branded, colored and pictured with an iPod to latch on to the Apple gravy train. Nevertheless, this is a nice looking little waterproof stereo that lets you play your tunes and sing along to your own songs in the shower.

The music output is really the only integration this iPod shower dock has to the iPod player, or any MP3 player for that matter. The clear dome opens to allow the safe keeping of the player without getting wet. The Shower iPod / MP3 player lets users adjust the volume, radio stations and a digital clock, but does not provide control of the iPod through the Shower dock as we had hoped.

It’s still not a bad way to bring your favorite tunes into the shower, though. … 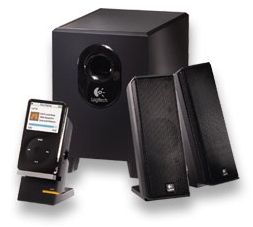 The Logitech X-240 speaker system includes an integrated, stow-away cradle for an iPod, PDA, or mobile phone. The cradle makes it easier for people to charge, sync and play their portable device with their PC.

The X-240 Control Center Cradle includes audio controls for a PC or Mac that provides digital music enthusiasts with “convenience and flexibility” when using iPod or Zune with a PC. The plug-and-play cradle allows people to dock their digital device to charge it, sync it, or just play music. The cradle has specialized trays for the iPod and Microsoft Zune and can be stored flush with the control pod when not in use.

Keep in mind, the X-240 isn’t just a fancy iPod cradle; it is a quality speaker system too. Dynamic, real-time bass equalization maximizes bass response from the down-firing subwoofer while … 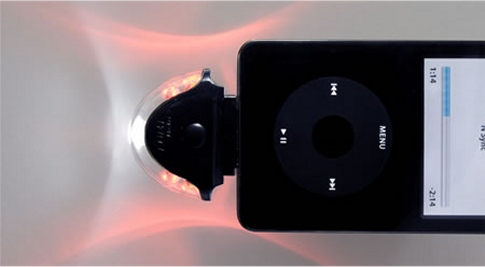 Adding to the ever-growing list of iPod accessories available today, a Japanese company called Trinity has released this Lumi Flasher for the iPod. The LED light accessory plugs into the iPod docking port and has one white and four red LED lights.

According to NewLaunches, the Lumi Flasher has six different modes that the lights can flash in, including random, sequence and flashing based on the music playing. There is also a mode to simply use it as a flash light.

We’re not entirely sure of the purpose other than to obviously draw some additional attention to the music player, but I’m sure there are those who may find their iPod just not exciting enough as it is and would like to add a little flash, literally.

The iPod has created such a flurry of excitement that the number of iPod accessories and compatible devices have been overwhelming. Here is a compilation of some of the more interesting iPod accessories that the Slippery Brick editors have come across this year. We’ll add more as they come in. 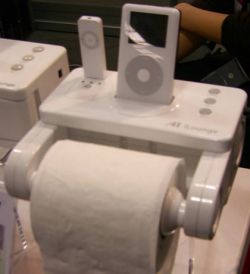 Hey, you can play games in the bathroom, so there is no reason why you should not be able to listen to your music in the John, too. The TP iPod dock just adds some convenience to listening to your music no matter where you are and what you’re doing. 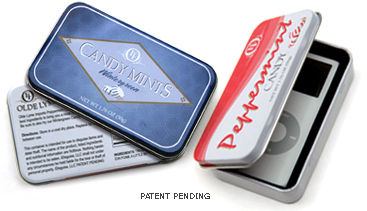 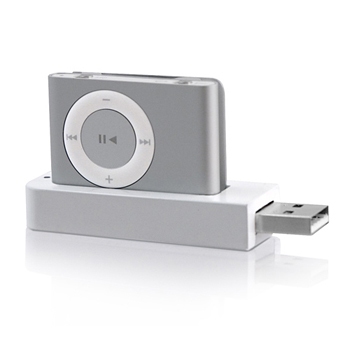 iPod accessories abound these days, and once in a while you can find one that might actually be useful. I’m not saying that this is something you need, but with the iPod Shuffle being as small as it is, this simple little docking station keeps it from getting pushed around your desk.

This really small Shuffle dock has no cords, and just plugs directly into your USB port. It’s profile is narrow enough that it takes up no more room that a cord would, and is light enough even with the Shuffle in it that it is not going to put too much torque on your USB port.

The thing that you will want to watch out for with this is the position of your USB port. We are not sure how well the Shuffle stays in position in the dock, so if … 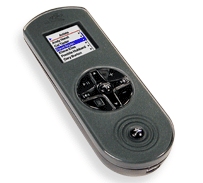 Keyspan has announced it has started shipping the TuneView for iPod. The TuneView is a 2-way RF remote control with a color LCD screen that lets you browse and fully control your Apple iPod.

The TuneView system consists of a 2-way RF remote with color LCD screen, a universal iPod dock, a USB power adapter, audio and USB cables, and various dock inserts. In addition to controlling your iPod the system will allow you to :

Certainly there are other iPod remotes on the market, but the color LCD screen on the TuneView is a nice touch … 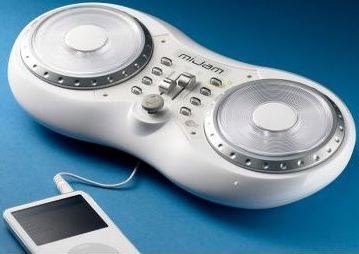 The miJam iPod DJ Mixing Studio is a personal mixer that can take input from your iPod and allow you to apply your own remix. Actually, you can probably use any digital audio player to provide the music input, but these days everything is associated with the iPod when possible.

The mixer has two discs that allow you to mix and scratch providing different background rhythms, fill-in sounds, drum fills and voice effects. You can also change the volume and tempo speed and attach the output to a PC or Mac to save the result.

The iPod mixer runs on 4 AA batteries and runs only about $40.

Permalink | Comments (4) |
Posted in Belkin,iPod,Outdoors by Chetz on December 7th, 2006 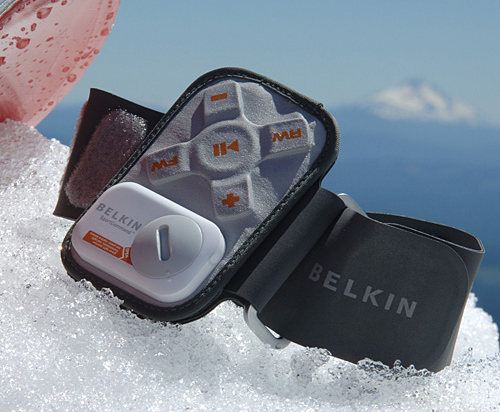 It’s nice to be able to take your music with you when you are outdoors, but it is not nice when your iPod or any DAP gets wet or banged up from the elements and your “extreme sport” activities. Snow sports such as skiing and snowboarding are great examples of when you would like your tunes with you and not have to worry about ruining your iPod while you’re checking your hang time.

The SportCommand from Belkin is a rugged remote control that can strap on to the outside of your jacket and control your iPod wirelessly while it’s in an inside jacket pocket or in your backpack. The SportCommand is waterproof and has big buttons to run the basic functionality of your iPod so you don’t have to take your gloves off and pull out the player to mess with …