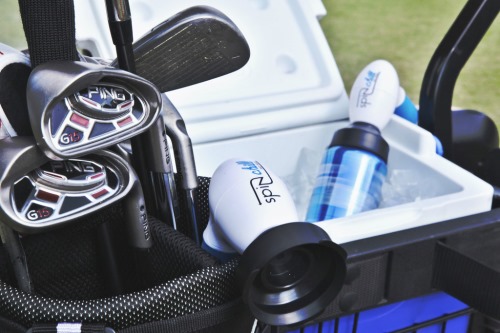 Take two really smart Mechanical Engineers from the University of Florida, give them a luke warm beer and they come up with a brilliant idea. They used their knowledge of engineering, heat transfer and their love of cold beer to come up with the SpinChill.

They found that cooling a container of liquid in a tub of ice took much longer than if that container was constantly spinning. The reason for this has to do with heat transfer. If the container is just sitting in the ice the outside layer of the liquid cools and it insulates the inner liquid which slows down the overall cooling process. By spinning the container it allows the warm liquid in the center to reach the outer edge where it can be cooled instantly. 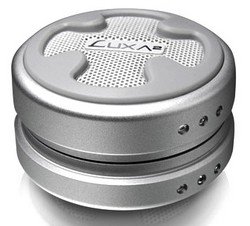 So laptop manufacturers should really be making their products good enough so that you don’t need to buy a separate cooler, but since we live in an imperfect world, we still need to buy them. And if you are the type that loves Gucchi, Prada and needs everything decked out in crystals and sparkle this would be your laptop cooler of choice.

This Luxa2 M4 Laptop Cooler is USB powered and will cost you just $49.99. It may not say Fendi, Prada or Gucchi, but it does have Swarovski crystals. 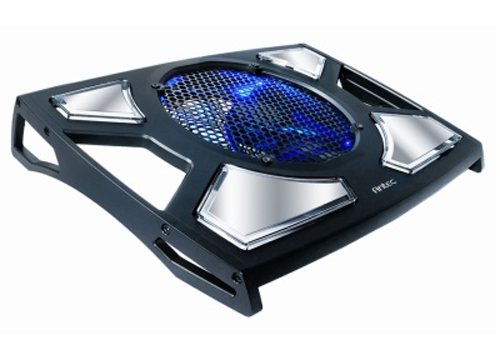 Antec has revealed a rather cool looking notebook cooler which sits under your laptop as you work. It is called the Notebook Cooler 200 and you’ll find it pricing around $90.

The Antec Notebook Cooler 200 comes with what Antec says is a “200mm Big Boy fan” with 400 and 600RPM settings so you can adjust cooling for performance or noise levels. There’s also blue LED illumination as it operates for that extra special X-Files feeling. 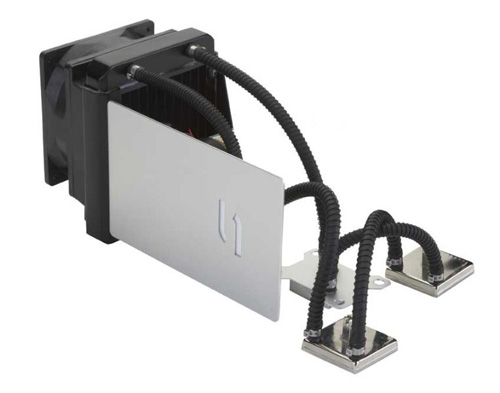 CoolIT Systems is out with word of new liquid cooling systems specifically designed to work in conjunction with Intel’s D5400XS motherboard (formerly codenamed Skull Trail). It is called the ST line and its made up of the Boreas MTEC Chassis ST and PURE ST, priced at around $900 and $270 respectively.

The PURE ST, according to CoolIT, “easily fits into any chassis with a 120mm fan mount and efficiently cools both CPUs and the chipset with near silent operation.” The Boreas MTEC, meanwhile, “combines CoolIT’s most powerful MTEC technology in the Boreas with the well renowned Silverstone TJ07 chassis to create the ideal barebones kit.”

It looks like that USB Mini Fridge we saw earlier this year, not unlike Spiderman, has had it’s suit changed from red to black and has come up with some advanced powers. Now this little fridge that snugly fits a single 12 ounce can will not only cool it down, but can also heat it up.

The USB Mini Fridge and Heater appears to carry the same shape and always-on blue LED lighting, but now with the flick of the inline switch on the cord can heat up its contents by by 34°F or cool it down by 28°F. The little refrigerator/heater can achieve these temp changes in a matter of 5 minutes and is powered by a standard USB connection to just about any computer. 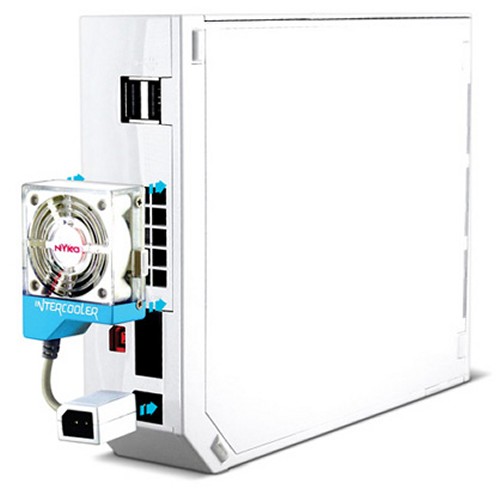 This isn’t the first Wii cooler we’ve seen and probably won’t be the last, but even after the latest firmware upgrade and hot WiiWare games in the works, needing something to cool the console down due to intense processing heat has never crossed our minds.

I guess there could be a chance that your flailing around during game play could heat up the room quite a bit, or you have the Wii running in a small, unventilated cabinet or some other odd situation so by all means if you are worried about it overheating the device runs a very reasonable $15 and certainly couldn’t hurt. It connects discretely onto the back of the console and has a pass through power connection so it doesn’t require moding the console or even needing another electrical outlet. 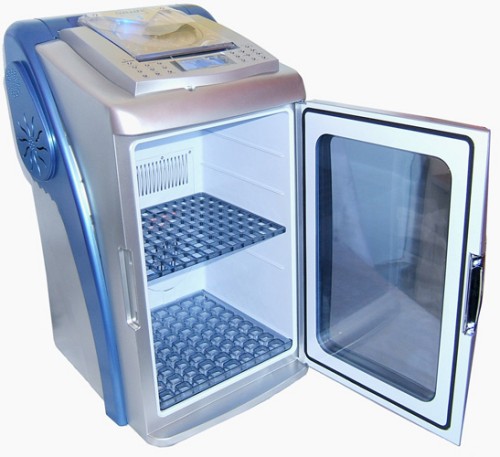 The Cooltone Mini Fridge provides an interesting combination of popular dorm room items into one “cool” package. This refrigerator has a 22 liter capacity which is enough to hold 20 standard beverage cans and keep them cold, but there’s much, much more.

The Cooltone gets its name from the multiple music-playing features included in this unlikely combination. On the top of the fridge is a standard top loading CD player and and AM/FM radio which both play music out of the integrated speakers built into the sides of the Cooltone. Users can also connect stereo headphones or connect external speakers to further enhance their extra-cool music. The fridge/stereo also has a standard 3.5mm input jack where you can connect an auxiliary MP3 player to sound through the speakers for the rest … 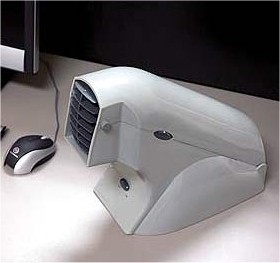 This 10.5-inch-tall device is made for those that feel the office temperature is just a little too warm for comfort. The desktop Air Conditioner works quietly and runs off of 2 D batteries or a 3V DC power adapter (that you must provide yourself).

The cooling mechanism is a little less high-tech than you might initially think and really comes down to the equivalent of placing some ice in front of a desk fan. Although the Desktop air conditioner has a condensation catch tray it has no mechanical condenser. The company packages a water bottle along with the cooling gadget that you are to fill with water and freeze. Once frozen you can place your cold water bottle in the air conditioner which passes air over it and onto you.

Even though the Wii game console doesn’t have the most intense graphics it still has the potential of getting too hot. The spot you put the compact console in might not have enough ventilation or the room might just get too warm with all the flailing around during a heated game of doubles tennis.

To avoid an overheated situation the Wii fan has come to the rescue as a simple, external cooling accessory for your Wii game console. The Wii fan connects to the back of your game console and is custom designed so that it can connect to the USB port and pull air through the existing vent in a one-piece gadget. If you’re concerned that this thing covers up all of your USB ports, luckily the designers have thought of that as well extending two USB ports on the … 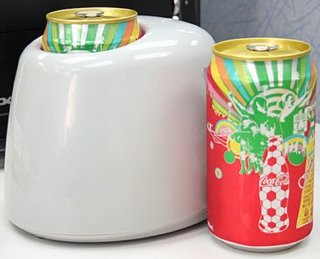 It appears that finding a good and efficient cooling mechanism for a single canned beverage at your desk is a little hard to come by. We’ve seen the little USB Mini Fridge and that little “cold plate“, but neither can get anything real cold, real fast.

This USB Can Cooler and Warmer from Brando looks like a noble attempt but its unclear just how good of a job of warming or cooling it really does. It’s completely USB powered which is nice and it can warm things up to what appears to be 65 degrees, which really isn’t too warm, unless that means 65 degrees above the room temp. Same with the cooling which says it can drop the temp of your can up to 20 degrees below the room temperature, so if its 85 in your room again we’re … 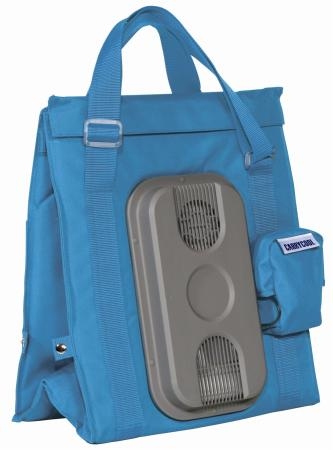 An insulated bag to carry your beers or soda in when you’re out and about is an economical and handy way to go, but there’s always a time limit on how long things are going to stay cool. This CarryCool tote bag, although maybe lacking in style little, makes up for its looks with a built in, powered, small refrigeration unit. Plug the CarryCool into the lighter socket of your automobile and it will keep the contents cool for as long as you need, or at least until your car battery goes dead.

The thing that this refrigerator bag doesn’t compensate for is price. Conveniences of this type certainly don’t come cheap and will run you a “cool” $155. 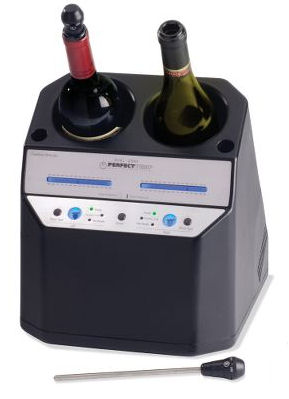 There are plenty of devices that are made to store wine with the correct temperature and humidity, but the recommended storage temp and the recommended drinking temp are not always the same for many wines.

This chiller from Hammacher Schlemmer can chill two bottles of wine at the same time, to two separate temperatures. It works by uncorking the wine and inserting a wireless temperature probe/stopper into the bottle. This way the chiller will cool to get the actual wine temperature correct, and not the chamber that the wine is in.

The dual wine bottle chiller has some pre-programmed temperatures for common wines or it can be set manually, and LED lights on the front show when the wine comes into the optimum range. This chiller is priced at $130. 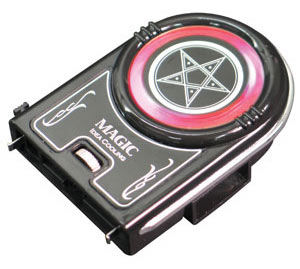 What type of magic that’s involved in this pentagram ladened cooling fan we’re not sure, but what we are pretty convinced of is that it generates some serious negative airflow to strip your notebook of excessive heat.

This Magic notebook cooling fan weighs only 60 grams and connects via USB to draw hot air from you notebook at two different speeds and expel it in a designated direction with the ability to rotate 180 degrees.

Keeping your machine cooler can improve performance, increase the life of the components and even just keep the lap it’s sitting on just a little cooler. Evercool also added a little more style to this fan than you usually might see with the LED light show on the case and what they call a “mysterious” pentagram design. 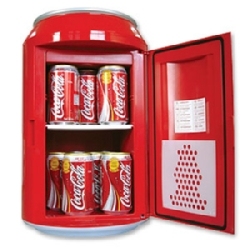 The USB Mini-Fridge definitely has its advantages, but slowly cooling down one can at a time sometimes just won’t do the trick to keep up your caffeine high through a full night of gaming.

When your ready to make an upgrade you can take a look at this Koolatron can-shaped fridge. This little Coca-Cola Fridge is 20 inches tall, 13″ in diameter and will hold up to eight 12oz cans or two 2-liter bottles. The fridge can both cool and heat, bringing the temperature down to 40 degrees below room temp, and up to 149 degrees F. A USB power source won’t cut it for this much cooling and heating, but this fridge does have a 12-volt cigarette lighter power source for your car or can run on the 120-volt outlet in your …

END_OF_DOCUMENT_TOKEN_TO_BE_REPLACED
Permalink | Comments |
Posted in Coolers,Hello Kitty by Darrin Olson on May 28th, 2007 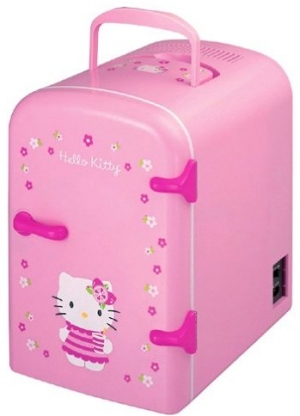 Every time we turn around it seems Hello Kitty has something for everything. Adding to their broad list of Hello Kitty branded products is this Hello Kitty Mini Fridge. Not only is it able to keep things cool, but it can warm things up as well.

This mini fridge has six times the capacity of the USB mini fridge with the ability to hold six 12 ounce cans instead of just one. It draws its power from a standard electrical outlet or makes itself portable with a 12v cigarette lighter for the car. The fridge has three modes; heat, cool and off. The heat mode will bring items inside the aluminum lined container up to 122° F and the cooling mode cools down to 46° F.

The device measures 11 inches tall and weighs about 6 pounds empty, and even has a little handle on …