Posted in Computers by Shane McGlaun on October 30th, 2008

A KVM switch is a necessity in some environments, like the sever room. In other places, a KVM switch can simply make things less cluttered and less complex. This is especially true when you need two computers, but don’t have room for two keyboards, displays, and mice.

For the laptop user looking for a way to control another local laptop or desktop computer ATEN Technologies has introduced the Laptop USB KVM. The device connects to both computers via a single USB port and offers plug-and-play functionality that requires no software installation. 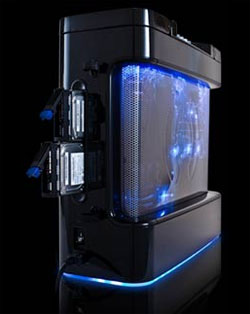 My gaming PC is liquid cooled and when people come into my office it blows their mind that you can have a computer cooled by water like a car. Liquid cooling if far from the most exotic cooling method serious enthusiasts use to keep their CPU frosty, but it’s still impressive to the non-enthusiast.

Hardcore Computer has taken liquid cooling to an entirely different level with its new Reactor gaming PC. The reactor is the first commercially available PC that uses full liquid submersion for cooling. All of the heat generating components are submerged in a dielectric fluid called Core Coolant. 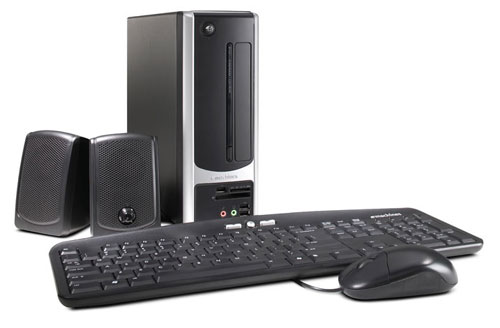 Desktop computers were once the computer of choice for the majority of users. Improvements in technology making notebooks cheaper and mobile Internet connections have turned the majority of users today to notebooks. However, there is still a market for the desktop PC, though it is shrinking literally and figuratively.

Many desktop computers today are shrinking in size into small form factor systems. The latest SFF desktop to hit retail shelves is the eMachines EL 1200 series. The series includes two computers — the EL 1200-05w and the EL 1210-01e. eMachines says the computers are about the size of a dictionary. 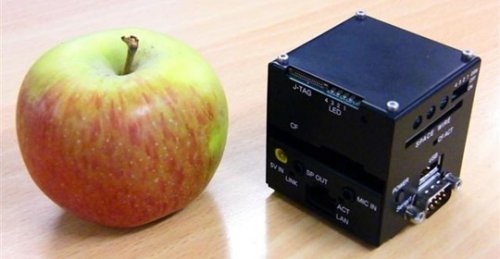 This thing looks like it’s alien in origin, but it’s made right here on Earth. It’s the future people! It’s the size of a small apple. And they crammed a lot inside. A 300 MHz processor, 16MB of onboard flash memory, 64MB of SDRAM, and a 1GB CompactFlash card loaded with Red Hat Linux. On the outside, it’s got a single USB port, VGA, Ethernet port, RS232 port, and mic and speaker plugs.

The entire deal is powered by a 5V plug. But that’s not all. It’s also got a “Space Wire” port, which is a proprietary interface used by people like the ESA, NASA and JAXA, for when the Cube actually goes into space. Get it? Space cube. But it’s not just for space, you can get your own soon, “once a few technical issues have been ironed out”. They will retail for as much as $2,769. 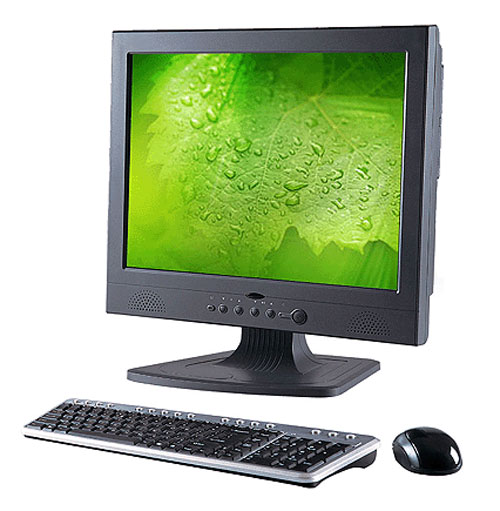 Many computer makers and experts believe that the future of computing will be touch screen devices. Some even feel that the mouse is the bottleneck for input to our current PCs. Several PC makers, including HP and other major PC firms, are already offering touch screen computers.

Tangent announced its new all-in-one touch screen computer called the Evergreen 17. The system uses a 17-inch touch screen with a resolution of 1280 x 1024. The computer uses a VIA Eden 1GHz fan-less processor, but can be optioned with a VIA C7 at 1.5GHz using a low-noise fan. Storage can be up to 160GB with a traditional HDD. 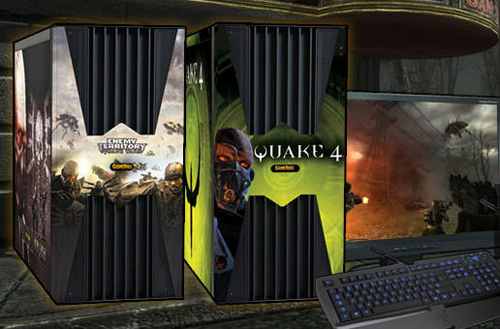 GameRigs says these systems “have striking design elements, a robust architecture and many personalization options.” They also come with a gaming accessories kit and specific items, such as the game itself, which are tied to the specific machine’s namesake title. These machines, just by the looks of them from the product pages, look amazingly hot and include advanced components which match in quality the external designs. 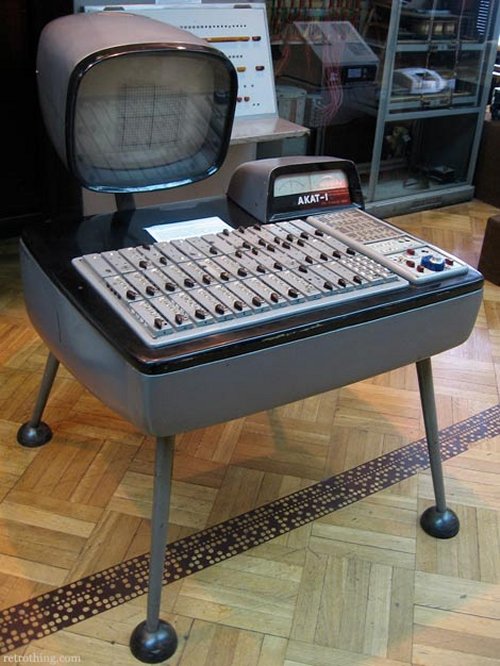 With all of the latest tech news we give you day in and day out, sometimes it’s nice to take a look into the past and honor the devices that paved the way for todays gadgets. This analog computer is known as the AKAT-1 and it can solve complex differential equations in real time and without digital logic.

But it’s a victim of time passing by, and now resides in the Museum of Technology, in Warsaw, Poland. You’ll notice it sports a very warm and stunning retro look. It has character. I mean it obviously belongs in a Trek ship, with Spock feeding it data. And yet by many it has been forgotten. We here at the Brick would love to have it in the offices, but our intern would just mess it up. Here’s to you AKAT-1. 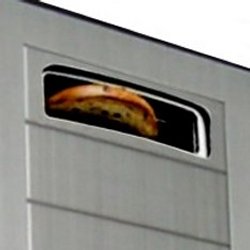 It’s a real pain getting up from your computer and walking to the kitchen to get your favorite snack, toast. You would think that cylon toaster you bought would motivate you. If only you had a way to make toast with your computer.

Wait a minute. You’ve got that spare drive bay that you’ve never used. Meet the CrazyPC 5.25 Bay Toaster, a toaster that fits in a standard 5.25-inch drive bay, and even includes software for adjusting the heat and time. Just insert the bread like a doughy CD and wait. Hot fresh toast is served. I’m not sure how it handles the crumbs. If you’ve ever cleaned out your toaster you know that crumbs will collect on the bottom. Only $29.99. 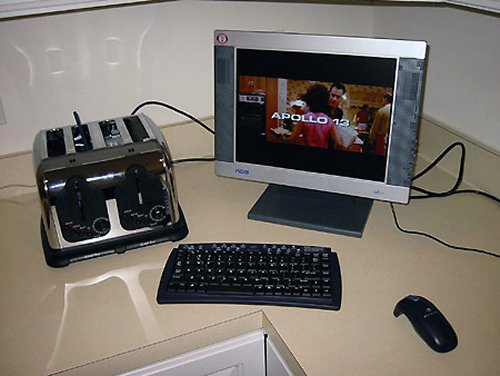 Why anyone would want to put a computer inside of a toaster is beyond me.(As if I never thought about it). And the creator didn’t just stuff a computer into some modern plastic toaster, instead he went the full distance and jammed it in a vintage chrome toaster. And not a 2 slice job, but 4 slice.

The only downside is that one wants it to still make toast, maybe with the computer’s excess heat, but alas it has no toasting abilities. It does have a 3600 MHz processor, 2.5 inch hard drive, DVD-rom drive, and a router inside. It’s what the PC may have looked like in the 1950′s…If toast never existed. 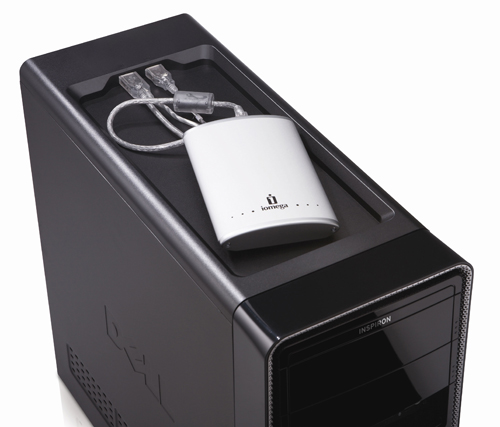 Dell this week unveiled two new Inspiron PCs – one is a desktop for family activities and the other is a laptop geared towards students. The Inspiron 518 desktop prices at around $350 for a basic model, while the Inspiron 13 laptop costs around $700 at Wal-Mart.

Dell had this to say of its two computers, both of which are available now. “The Inspiron 13 laptop is a great choice for back to school shoppers looking for a small, light, highly efficient mobile PC. With a starting weight of just under 5 pounds, the Inspiron 13 combines a simple and clean design encased in glossy Pacific blue with black trim. Smart features include a 13-inch high definition display, capacitive touch media buttons, 8-in-1 media card reader and slot-load DVD drive. Optional features include built-in wireless networking, built-in webcam and Bluetooth connectivity. 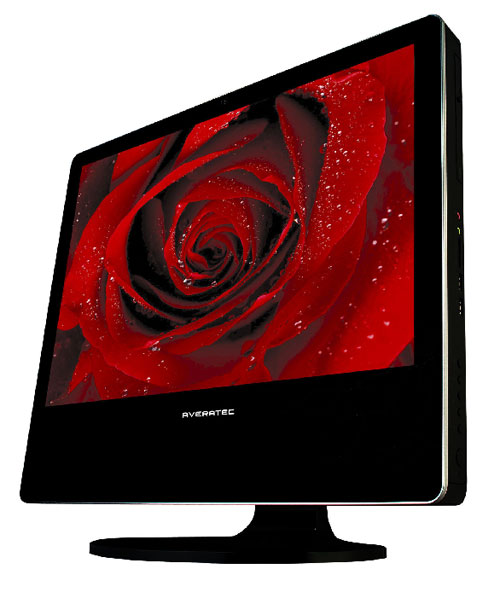 The concept behind all-in-one PCs is interesting to me. You cram everything a PC needs inside the LCD case and save space on the floor and make things more attractive overall. The downside of an all-in-one design is that they tend to offer less performance than can be had on traditional computers and they tend to cost more than similar standard computers.

Today Averatec announced its first all-in-one computer and it is simply called the Averatec All-In-One. The computer has a 22-inch display and inside the display case is crammed 2GB of RAM, a 320GB HDD, built-in HDTV tuner and more. The computer is powered by an Intel Core 2 Duo E4600 CPU and uses a discrete NVIDIA GeForce 8400 for graphics.

For lots of people when it starts getting close to back to school time, they start looking for a new computer. For most users a basic computer will do the trick and the biggest factor is the price of the system. While eMachines may not have the best reputation, its computers certainly fit the low-cost requirement.

Today eMachines announced three new computers just in time for the back to school crowd. The first new system is the T3656 desktop with a retail price of $299.99. For that amount you get an Intel Celeron CPU, 1GB of RAM and a 160GB HDD. If you need more performance the eMachines T5374 retails for $399.99 and features a Intel Celeron dual-core processor, 2GB of RAM and a 320GB HDD.

For many students around the country summer vacation has just started. The cold, hard reality of it is that back to school is just around the corner. To help make back to school a bit more tolerable Gateway is announcing new desktop and notebook computers.

Gateway is offering multiple new models of desktop and notebook systems that will retail from $549.99 to $1149.99. The three lines of Gateway notebooks; the P-Series, M-Series, and T-series are all offering new configurations. One new configuration in the M-series is the M-6848 featuring a Core 2 Duo T5750, 4GB of RAM and more for $799.99.