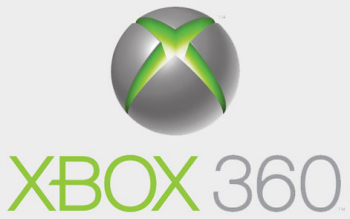 Today Microsoft announced that it is extending the warranty of their Xbox 360 game console from 90 days to 1 year. This applies to new purchases as well as to those who have previously purchased the game console.

Xbox owners that have already had repairs done on their game console that were within a year of the purchase will automatically get a refund if they paid for the repairs. There is no need to fill out forms or contact Microsoft, reimbursement checks will be automatically sent and should be arriving in about 10 weeks according to Microsoft.

Microsoft says that the extension of the warranty for US and Canadian customers is to make it consistent throughout the world. The 1 year warranty will also be consistent with rival game consoles Nintendo Wii and Sony Playstation. Nintendo also offers a … 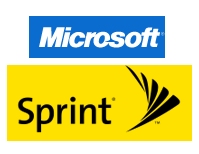 Microsoft and Sprint have announced an alliance in which the companies will develop and deliver a range of mobile search services for Sprint’s business and consumer customers.

The initial offering enables Sprint customers to use Windows Live Search for mobile on their wireless phones to search location-based content from the Internet. The new mobile search service based on Windows Live aims to provide a single access point to relevant online content based on a keyword or phrase. The search will include the Sprint catalog of offerings such ring tones, games, and screen savers as well as nearby stores and restaurants.

Windows Live Search for mobile offers features such as maps and directions but requires users to input their location by entering their ZIP code, address, or city and state. Future versions of the service are planned to enable consumers to give permission to automatically locate them … 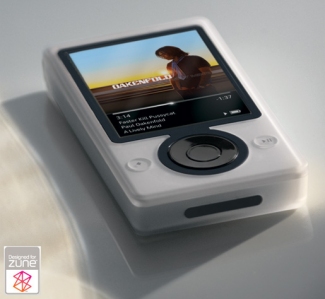 While no one can accurately predict how the Zune will fare this holiday season, one can guarantee that it will take a piece of the considerable market share now enjoyed by the iPod.

Microsoft is currently in the midst of celebrating the U.S. launch of the Zune digital media player and Zune Marketplace music service. The celebration consists of six free concerts in public parks and plazas in urban centers across the country.

At the inaugural concert in Seattle, Gates outlined the Zune vision of creating new ways for people to connect, discover and share music. Gates demonstrated that through Zune-to-Zune managed wireless sharing, consumers are empowered to promote and sample tracks, thus increasing exposure for artists. The service logs the music that people have shared, making it easier to purchase the songs they like the next time they synch up their player. Consumers … 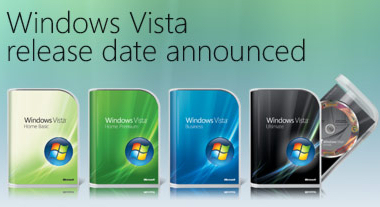 Home Basic: This looks like a real scaled down version that is stated for use in basic home needs such as emailing and surfing the internet.
Home Premium: This version looks to still be a truely a home version of the application, but has some added features including the Media Center and integration with Xbox 360, as well as enhanced desktop navigation and Tablet support.
Business: The business edition is designed for small and mid-sized organizations, and does not have the … 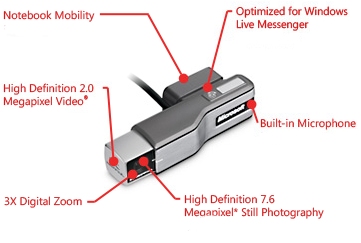 A webcam designed specifically for notebook computers was the intent with Microsoft’s LifeCam NX-6000.

The design of the NX-6000 webcam let’s it fit nicely on top of the notebook lid, needing no special attachments or stands so it is easy to bring along and easy to attach. A microphone is also built in so that a separate device or connection is not needed.

The LifeCam has a high definition 7.6 megapixel camera for still photos, and can record high def video at 2.0 megapixels for a 1600×1190 pixel picture. The camera also has 3x digital zoom for pictures and video to allow you to be up close and personal with the person on the other end, and the 71 degree wide angle lens let’s the whole family fit in the picture at once.

Being a Microsoft product, it only makes sense that the LifeCam NX-6000 integrates … 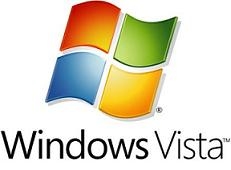 Keeping on track with earlier Vista release information, Microsoft has said that it’s enterprise version of the new Vista operating system will be available on November 30th to business customers along with Office 2007 and MS Exchange Server 2007. Vista is not expected to be available to the general public until early next year, but PC manufacturers should start seeing the copies of the new OS within a couple weeks to be able to start shipping to their business customers. The global launch event is scheduled to be held in New York with a number of smaller launches following in January and February in 15 different US cities.

Various reports have come out recently such as one from M&C Tech Munich stating that “Microsoft has offered to equip PC’s bought now with the new operating system called Vista under special conditions.” I’m interpreting this … 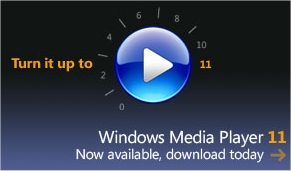 Windows Media Player 11 for Windows XP was released by Microsoft on Monday. The focus on this release of the player includes changes to the navigation system and new ways to store music, video, pictures, and recorded TV.

A significant change to this version of the player involves a partnering with MTV Networks and its URGE music service. URGE is the featured digital music service for Windows Media Player 11 and is deeply integrated into the Player.

The URGE library contains more than 2 million songs from 18 genres and many exclusives from MTV, VH1, and CMT. The URGE network gives you access to hundreds of playlists, 130+ URGE radio stations, music feeds, blogs, interviews and feature stories.

Songs on URGE are typically $.99 per track or $9.99 per album. An URGE All Access subscription plan which gives you unlimited music downloads is … 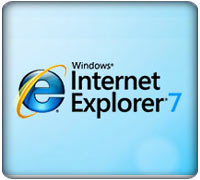 In response to the increase in online security threats, Internet Explorer 7 provides safeguards that help protect against malicious software and phishing attacks. In Internet Explorer 7, Microsoft has helped reduce the exposure to these attacks by fortifying the browser itself and providing better information to users to assist them in …

Microsoft confirmed that it is on track to deliver its new operating system, Windows Vista, for worldwide consumption to its volume license business customers in November; while worldwide general availability is expected in January. Microsoft also confirmed that it would be releasing Windows Vista in Europe and Korea on schedule, following discussions with the European Commission and the Korea Fair Trade Commission.

“We are excited to bring the security enhancements and innovative new features of Windows Vista to our customers and partners around the world, and we are committed to adhering to local law in every region of the world,” said Steve Ballmer, chief executive officer of Microsoft.

Microsoft has agreed to make a number of changes to Windows Vista in response to guidance the company received from the European Commission. These discussions involved changes to Vista Search Features, the Microsoft Office for fixed … 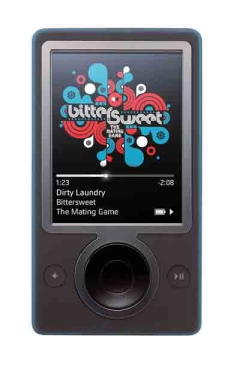 Microsoft has announced the price and launch date for its Zune digital music player and service. The new player will be available in the US on November 14th and will be priced at $249 (USD). Microsoft also announced that the monthly subscription to its new music service would cost $14.99 or 79 points per track using Microsoft’s point system.

You won’t be empty handed as the Zune will also come pre-loaded with a variety of songs and music videos. The audio tracks include: Band of Horses, “Wicked Gil” (Sub Pop Records), Bitter:Sweet, “The Mating Game” (Quango Music Group), CSS, “Alala (Microsoft edit)” (Sub Pop Records), Darkel, “At The End of The Sky (edit)” (Astralwerks), Every Move a Picture, “Signs of Life” (V2), Small Sins, “Stay” (Astralwerks), The Adored, “Tell Me Tell Me” (V2), The Rakes, “Open Book” (V2), The Thermals, “A Pillar of … 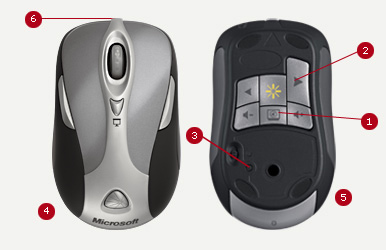 Designed specifically for the weary road warrior with too many gadgets to carry, Microsoft has created the Wireless Notebook Presenter Mouse 8000. The 8000 is a 4-in-1 device that functions as a slide presenter, a laser pointer with digital ink, a media remote control, and a 2.4GHz Bluetooth laser notebook mouse.

The mouse contains all the standard features you would expect from a wireless mouse with a few nice extras thrown in. The bottom of the mouse contains control buttons for screen navigation forward, back and full screen). The 8000 also contains some attractive media control capabilities that are compatible with RealPlayer, iTunes and Windows Media Player. The presentation keypad also acts as a media control that allows users to play, pause, change tracks, and adjust volume.

Nokia announced today an agreement with Microsoft to embed functionality into its Mobile Search platform. Mobile users will now have access to Live Search directly from their compatible Nokia S60 devices. The Mobile Search experience from Nokia lets users find search results faster because search will be accessible directly from the menu screen. In addition to search, Microsoft will provide advanced features such as stock quotes, movie times, and information via Encarta Instant Answers.

The Mobile Search service will be available …

MSN announced the beta release of Soapbox on MSN Video. SoapBox is a user-uploaded video service that allows people to upload, discover and share personal videos with the Soapbox community. Soapbox will be available on MSN Video and will be integrated throughout Microsoft’s portfolio of online services, including Windows Live Spaces and Windows Live Messenger.

With Soapbox, Microsoft is hoping to capture some of the enormous successes of YouTube.

“Soapbox delivers on a critical component of the MSN growth strategy of deepening audience engagement by enabling people to participate in the content experience,” said Rob Bennett, general manager of Entertainment and Video Services for MSN. “By adding a user-uploaded video service, we are rounding out our existing investments in commercially produced and original content on MSN Video.”

Soapbox uses its own player for uploading, searching and sharing video. Users can rate, comment, and tag videos. …

Microsoft recently announced the most information yet on its upcoming Zune digital music player and service. The latest information focused on the Zune’s capabilities that let users share music with friends. The Zune can store and display video and pictures, comes with a 3-inch liquid-crystal display screen, a 30-GB hard drive, FM tuner, and will be available in three different colors: black, white, and brown.

Microsoft also plans to debut the Zune Marketplace into the Zune ecosystem. The Zune Marketplace is an online music store where customers can import existing music, pictures and videos in many popular formats and purchase millions of songs. The service will offer the standard features such as genre browsing, top songs, albums, artists, new releases, and featured items. Microsoft will also offer Zune Pass, which is an online subscription that allows users to download …

Well, there are a few nice accessories and shortcut buttons (some of which are specifically for Windows Vista) that I guess can add some more control from the general keyboard area, both through software and hardware.

The Entertainment Desktop 8000 is wireless and connects via Bluetooth which allows you to be up to 30 feet away.
These are rechargeable. This is nice because one of the bigger …