Posted in Apple,iPod,News,Shuffle by Darrin Olson on October 31st, 2006

Apple has announced that it’s newest member to the iPod family, the new iPod Shuffle, will be available for purchase this Friday. This will be the smallest of the iPod family to date.

The iPod Shuffle is a digital music player that can be connected to your Mac or PC via USB 2.0 and an included dock to sync up songs from Apple’s iTunes music store.

The new iPod shuffle has 1GB of flash memory which allows it to hold up to around 240 songs (avg 4 minute song), and the battery gives it up to 12 hours of life on a full charge depending on use and the number of charge cycles the battery has had. The new shuffle is only about half the size of it’s predecessor at only half a cubic inch in total size and half and ounce, … 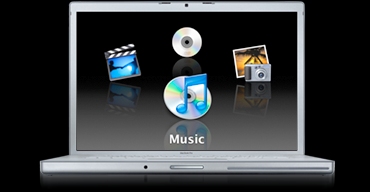 If you are one of the many that have suffered from the random, unexpected shutdown problem that has been plaguing the Apple MacBooks as of late, you’ll be happy to hear that Apple has released a fix to the problem, and the fix can be done in lieu of bringing your MacBook in for service.

For about 4 months this issue has been cropping up in many places, and so much so that http://www.macbookrandomshutdown.com was created and has gained quite a bit of popularity due to the common issue with over 1500 reports listed with over 150 pages of user comments on the complaint site, and is an unfortunate hit to the new Apple notebooks with Intel Processors.

No reports have been issued as to the results of how well the update is working. Some users have said that the problem is related …

Yes, I think the iPod is pretty cool, but we are talking about the more common use of the word “sick”.

Apple said yesterday that it had discovered that a some of its Video iPods shipped with a Windows virus on the player.

“Less than 1 percent” of the Video iPods sold after Sept. 12 were infected with the Windows RavMon.exe virus, Apple said.

“This known virus affects only Windows computers, and up to date anti-virus software which is included with most Windows computers should detect and remove it,” Apple said in a statement on it’s web site. “So far we have seen less than 25 reports concerning this problem. The iPod nano, iPod shuffle and Mac OS X are not affected, and all Video iPods now shipping are virus free. As you might imagine, we are upset at Windows for not being more hardy …

According to new rumors surrounding Apple Computer, the digital music behemoth is readying two new cellphone models for possible release in January. In a report by Prudential Equity Group analyst Jesse Tortora, these new models could launch at the January 2007 MacWorld conference. Reports of Apple officially filing for the ‘iPhone’ trademark further fuel the rumors.

Tortora went on to say that “recent checks” give him reason to believe Apple will begin selling a smartphone and a slim music phone.

No information has been released as to what type of business model Apple will use to sell the phones. T-Mobile is considered a likely partner after Chief Executive Robert Dotson said during a press conference Oct. 6 that Apple’s operating system represents the future of next-generation wireless networks. 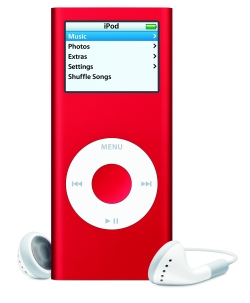 Today Apple announced the release of the iPod nano Red Special Edition. The iPod Red SE was developed by U2 lead singer Bono and Bobby Shriver to assist in the fight against AIDS in Africa. Apple will contribute $10 from the sale of each iPod nano RED Special Edition to the Global Fund which provides funds for programs for women and children affected by HIV/AIDS in Africa. Customers will soon be able to purchase a $25 iTunes RED gift card at Apple’s retail and online stores next month. 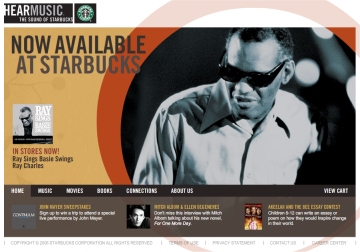 Starbucks and Apple today announced the availability of the Starbucks Hear Music catalog on the iTunes Store. This is great news for iTunes users as they will now have the ability to preview, buy and download a wide variety of Starbucks popular Hear Music tunes.

Hear Music produces a wide range of albums which showcase both new and classic artists. Popular collections like the Artist Choice series, Opus Collections, and Debut Series releases make this a popular brand among coffee and music aficionados. The iTunes Store will showcase the Starbucks Hear Music offerings in a special new Starbucks Entertainment section. 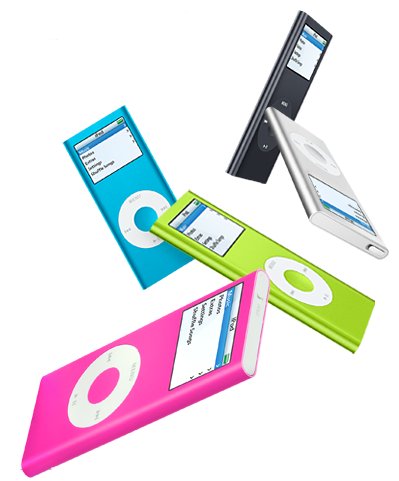 Apple has come out with its updated version of the iPod Nano that can hold up to 8GB of data. That’s twice as much as the maximum size 4GB of the previous model. That means that the number of estimated songs it would hold doubles too, bringing it up to around 8,000.

The size of the new iPod nano is as small as ever but it has a slightly new design, with more rounded edges. The colors have expanded. Previously all that was available was the black or white. Now you can get bright colors in the new anodized aluminum frame with pink, green, silver, blue and black.

Along with the extended potential playlist also came an extended battery life. The batter in the new iPod nano will let you play music continuously for up to 24 hours, and will charge back to 80% of … 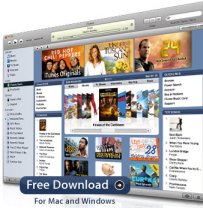 Seeking further domination of all digital media, Apple Computer has finally launched its online movie service Tuesday. Apple CEO Steve Jobs showed off the new device that will make it easier for consumers to watch the videos on television. iTunes is now offering over 75 movies from Walt Disney Pictures, Pixar, Touchstone Pictures and Miramax Films. Customers can purchase and download movies to watch on their computers and iPods, and shortly on their flat screen televisions with Apple’s forthcoming iTV player.

Initially iTunes will only carry movies from The Walt Disney Co. where Jobs is a board member.

I picked up the 4GB iPod nano not too long ago. I got the black iPOD, which was a little harder to find but I really like the look of it. What really got me was how small this thing really is. They put the dimensions on the add and on the box, which shows 3.5 x 1.6 x .27 inches, but it never really hits you ’till you get one in your hand. This thing is small.

Aside from the size, the another feature I really liked about iPod nano right away was how easy it was to use. Within minutes I had the thing hooked up to my PC and was downloading songs from iTunes. Other attractive points to me were the accessories. There is a multitude of accessories for these things now everywhere, including stereo’s you can dock with, …