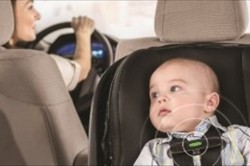 It is estimated that approximately 40 babies die each year from heat stroke after being left in cars. This is usually attributed to the fact that car seats for infants face away from the front of the car, allowing parents to forget about their sleeping children in the backseat. Now Walmart and Evenflo have teamed up to create the Evenflo Advanced SensorSafe Embrace.
The car seat uses a wireless receiver that is hooked up to the car’s On Board Diagnostics. It is then synced with the car seat which will play a “jingle” if the car is off and the car seat is still buckled. The difference between this car seat and other smart car seats is that it doesn’t work through the bluetooth in your cellphone, so the car seat will still remain effective if your phone is out of battery. The car seat is currently being sold at Walmart for $149.88.