Posted in twitter by Conner Flynn on May 6th, 2011 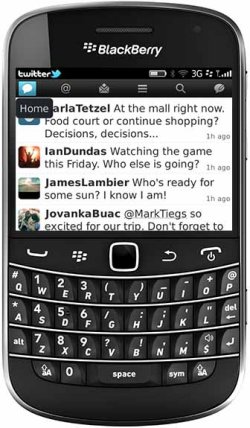 Good news for Twitter users who also use a Blackberry. Twitter for BlackBerry version 2 Beta is now available in the BlackBerry Beta Zone. RIM will do things differently this time, offering more frequent beta versions with features added and the current version 2 of the Twitter app brings a simplified navigation bar at the top.

It puts the Search, Find People, and Popular Topics screens into one Single Search Screen in addition to integrating with the Universal Search feature. It also offers a new Black Chrome color scheme and the Compose Tweet button is accessible and allows you to tweet from anywhere in the app. Sounds like some useful improvements.