Posted in Tablet PC by Conner Flynn on January 23rd, 2011 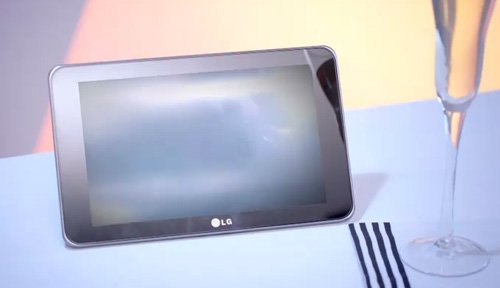 Rumors that the LG G-Slate would go 3D seem to have been confirmed by a Korean music video. Seungri’s clip for “What Can I Do” shows the device for the first time outside of a press event. It appears to show the dual cameras that would be needed for shooting 3D video. Earlier rumors had suggested a glasses-free 3D display and that seems to be the case.

A recent FCC filing which shows two holes on the back also supports that it has 3D. Other details are the front camera, HDMI and micro USB ports and an optional stand. The G-Slate should be based on NVIDIA’s Tegra 2 and have Android 3.0 on the 8.9-inch 1280×720 screen and 1080p video when using the HDMI output.