Posted in BlackBerry by Conner Flynn on December 1st, 2010 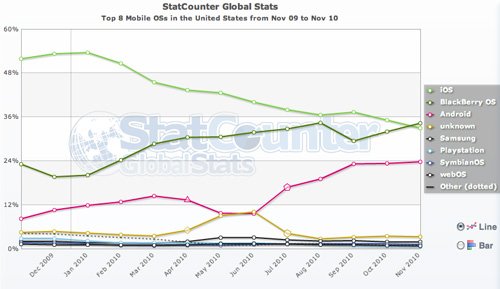 The BlackBerry had a victory today after StatCounter showed the platform overtaking the iPhone in web use in the US. They’ve been steadily narrowing the gap over the past year, and now RIM just slightly overtook Apple in traffic, accounting for 34.3 percent of American traffic while iOS slipped to 33 percent. Despite signs of growth before, Android as a web platform has leveled off at just 23.8 percent.

Worldwide figures also show RIM climbing, at 19.25 percent, but it still trailed iOS’ 21.9 percent and was well behind Symbian’s 31.9 percent. If these trends continue, Android and BlackBerry devices could get twice the web share of iOS sometime next year.