Posted in Android by Conner Flynn on October 5th, 2010 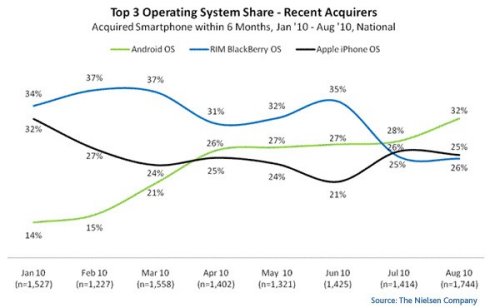 Android’s huge growth has now been illustrated by Nielsen’s statisticians in the above chart of recent US smartphone purchases. It shows very clearly that over the six months leading up to August 2010, 32 percent of American new phone buyers have bought a device with Google’s OS on board.

Android is comfortably ahead of RIM at 26 percent and Apple at 25 percent. These results seem to confirm NPD’s figures, which have Android at 33 percent of new US purchases. Android is indeed dominating.

These figures should jump further with the constant flurry of Android devices hitting the market.