Posted in iPhone by Conner Flynn on September 30th, 2010 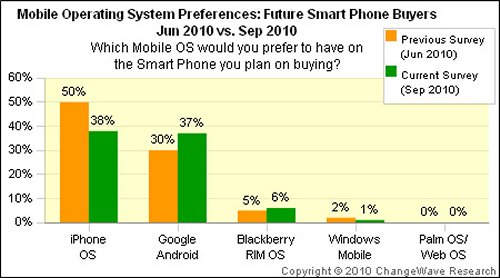 About as many smartphone buyers want an Android device as want iPhones. At least according to the latest ChangeWave metric. Consumer’s plans to get an iPhone have cooled off after the iPhone 4 high in June, which is only to be expected. In September about 38 percent wanted Apple’s handset, that’s down from half three months earlier. Android interest at the same time has spiked and now has almost as much interest at 37 percent, which is an all-time high for Google.

With just a fraction of interest, the launch of the BlackBerry Torch barely had an effect. RIM only moved one point to six percent.