Posted in Headphones by Conner Flynn on August 15th, 2010 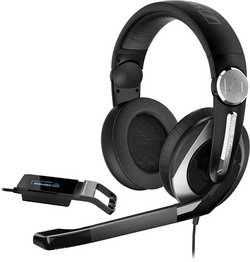 Sennheiser knows gaming. They’ve released plenty of headphones in the past for the gaming market. And now they have officially announced the PC-163D and PC-333D gaming headphones.

These headphones are great for both the casual and hardcore gamer who want to immerse themselves in the gaming world. Both headsets feature 7.1 surround sound, an adjustable mic boom and standard noise cancellation.

On the PC-333D, your volume control is integrated into the left ear cup and you can mute the microphone by raising it, instead of having to worry about an extra button. On the PC-163D headset, the volume control and mute option are on the headphone cord. The 163D is also an open style headset, so you won’t have your ears completely covered by them. The 333D are over-the-ears. Both are scheduled to release later this month, or by early September. No word on pricing.