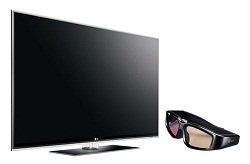 LG is finally preparing to make a really big push into the 3D market as it has started to offer its first Blu-ray 3D players and 3D TVs, and even putting both together into 3D bundles. They recently rolled out the Infinia LX6500 47″ LED TV along with the LX9500 55″ LED TV, which are its first 3D-ready TVs.

Oh and a free copy of the movie IMAX Under The Sea 3D.