Posted in iPhone Accessories by Conner Flynn on June 8th, 2010 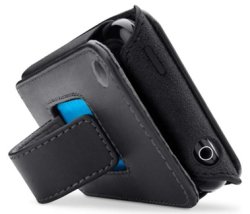 Belkin is one of the first companies out of the gate with new iPhone 4 cases. The new line-up includes the Verve Cinema for iPhone 4 which is a smart case that doubles as a kickstand when you use the foldout kickstand. That’s handy for watching movies on the iPhone 4’s new higher resolution Retina display.

The new phone means new cases, so you might as well start buying.