Posted in iTunes by Darrin Olson on September 9th, 2009 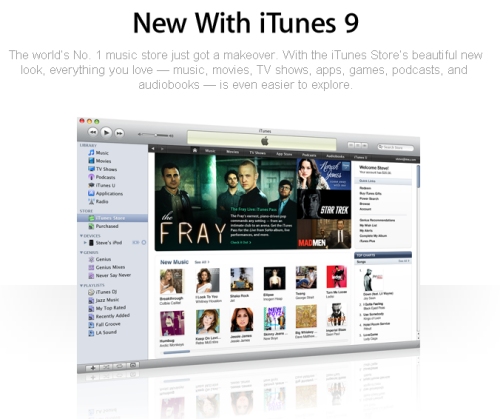 In part of today’s announcements from Steve Jobs and Apple at the “It’s Only Rock and Roll” event, they’ve announced the latest version of iTunes – iTunes 9.

This new version (at first glance) most notably has a a new look to it, making navigation a little easier and get around (provided you aren’t too used to the old version). They’ve also added a way to preview from anywhere in the store instead of having to find the right place.

iTunes LP is something something new with iTunes version 9, bringing back some of the features we used to enjoy with LP’s that have been lost with online music, such as lyrics, notes, video, photos and apperently some other things that were not mentioned up front. Genius mixes are another enhanced feature in this new version, playing automatically generated mixes of songs, ongoing, that the Genius mixer feels go good together.

Probably the most significant feature announced today for iTunes 9 has to be App Management. This lets you arrange your home screen for the iPhone and iPod touch through iTunes, and allows dragging and dropping of items, one at a time or many at a time.

Users can also use a new sharing tool. This allows you to see up to 5 computers in your home and the library on each, and then drag and drop media to any of them. This includes music, movies, TV shows, ebooks and even applications! You can now even gift content from the iTunes store to others, or add items to a wishlist that can be published directly to Facebook or Twitter.

iTunes 9 is available as of today.