Posted in Mobile Phones by Conner Flynn on June 7th, 2009 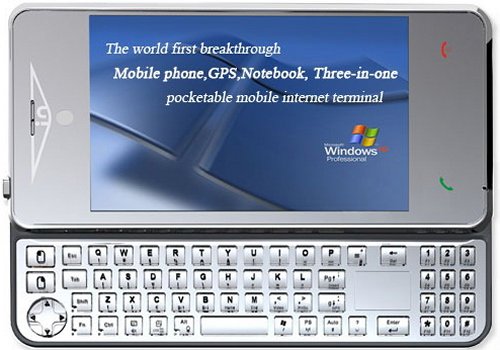 A Chinese company showed what it’s calling the world’s first mobile phone to run Windows XP at Computex on Friday. The xpPhone wakes Windows from standby mode to receive calls and text messages and has a battery life of seven hours when not in standby. With a larger battery it’s capable of running for 12 hours.

The device is powered by a customized chip from Advanced Micro Devices made by In Technology. It also features a pull-out QWERTY keypad, 120GB hard disk and a 4.8 inch LCD touchscreen with a resolution of 800 by 480 pixels.

Expect it to hit the Chinese market in about three months and later be marketed worldwide. The xpPhone will support Wi-Fi, optional WiMax, GPS and next-generation mobile.