Posted in Mobile Phones by Conner Flynn on December 11th, 2008 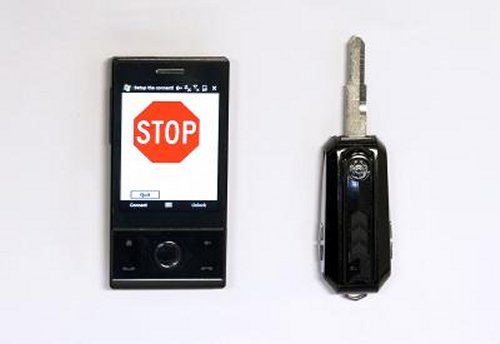 There’s nothing worse then a driver who is too busy running their mouth on a cellphone and not paying attention to the road. Or the other cars. Teenage drivers in particular love to get distracted by their mobile phones. Well, University of Utah engineers have designed a wireless car key device that stops users from talking on their cell phone or sending text messages while behind the wheel.

Each driver of a car will have a separate key device. When the key is extended from the device, it emits a signal that puts the teenagers phone in “Driving Mode,” so that they can’t use it and kill you. In driving mode the phone will display a stop sign and hopefully the death loving teen will get in the habit of leaving the phone alone while driving.

The university has licensed the technology to a private company in hopes to have it marketed within six months. Hopefully it will be distributed through a cell phone provider. They are hoping to avoid messages like this: OMG I JUST KLLD A GUY, which of course leads to a reply like this: LOL.