Posted in Review by Darrin Olson on December 15th, 2008 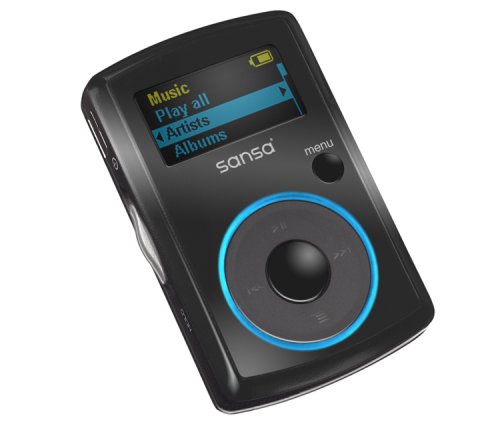 Anyone in the market for a small MP3 player should definitely take a hard look at the Sansa Clip from Sandisk before making a purchase. Comparable in size to the iPod Shuffle, the Sansa Clip packs in more features and now more storage giving some significant bang for your buck.

The most significant item for us on this particular MP3 player was the storage capacity. This little device now comes with the ability to pack as much as 8GB of music which is really a lot of songs. Connect it to your computer through the included USB cable and quickly transfer music or even use the device as mass storage to go. Also as we had mentioned when the 8GB Clip first came out, the clip provides 4x the storage of the iPod Shuffle for just a small more in price. But the storage is not all you get.

The Sansa Clip measures just 2.17″ x 1.35″ x .65″, weighs under an ounce and houses an FM radio tuner, microphone, equalizer and the ability to visually navigate your music, stations and settings through a surprisingly easy-to-see 1″ landscape display.

Using the Clip was easy and pretty intuitive. It has sliding power button on the left which is used to turn the device on and off and to lock the controls. The little sliding button was a little loose and rattled some when we would move around on our sample model, however other than that the player felt very solid. On the opposite side of the player is the volume and I have to say that compared to other MP3 players I’ve used, having separate buttons for the power and the volume was nice and made it easy to manage without even having to look at the player.

But, looking at the player is actually one of the nicest features. Sandisk has somehow created that small one-inch display to be big enough to easily read the songs that are playing, menu options and tune in radio stations. In fact, there is multiple lines of content on the display which is relatively easy to navigate.

The center buttons control the main navigation and I did find myself trying to rotate the circular button multiple times, but the navigation basically uses the outer circle for pushing up, down, left or right on the corresponding side. The center button is for selecting and there is a small “Home” button on the front that brings you back to the beginning which made it pretty easy to get around.

Tuning in radio stations was quick and easy as the player has a feature to quickly scan through and find all the stations available within range and has up to 40 preset stations. You can use the recording feature as well to easily record songs on the radio without any ambient noise from the microphone. The recording can be set for a predetermined amount of time or started and stopped at will, and the result is an MP3 file that you can transfer onto your computer and edit or move anywhere you would like. The device also has a microphone that allows you to record the sounds around you from class, personal notes or friends, and with an 8GB capacity you can record a lot.

The player comes packaged with a decent set of headphones (not great, but decent) some brief instructions that are mostly unnecessary and an installation disk with free one month subscription to Rhapsody. The Clip also has an internal battery with 15 hours of continuous playback ability which in our case actually lasted longer. With a combination of perusing the menu, playing the radio and MP3 music we hit almost 17 hours before the battery gave out.

In conclusion we were presently surprised with the Sansa Clip. The device is small and convenient, holds a relatively large capacity of data and has a larger feature set than it’s competitors for a comparable price. The 8GB Sansa Clip goes for $99.99, but you can get the same features with smaller capacities (and different colors) for as little as $34.99.