Posted in Star Wars by Conner Flynn on November 9th, 2008 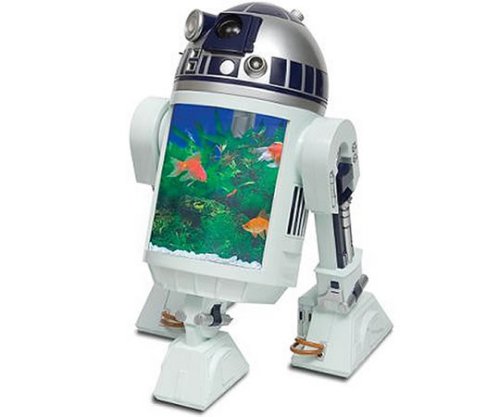 Not since the Steampunk R2-D2 have we been so shocked to see the droid in a whole new way. But this time it’s droid blasphemy really. Now the robot holds a 1 3/4-gallon aquarium tank in his central compartment. We always knew there was something fishy about R2, but damned if this doesn’t make us sad. Astromech droids were not made to be used as aquariums people. I don’t care how bad the prequels are.

The domed head rotates with vocal commands and he beeps just like in the movies. But if Luke had this model with him in the Death Star, he would have had to stop and feed fish every so often. The radar eye houses the eyepiece to a built-in periscope that provides an intimate view of the tank.

Includes filter and overhead LED tank lights that switch between red, blue, and green and get this. It includes a two-sided waterproofed cardboard insert depicting scenes from the movie as a background. All for $129.95.