Posted in Holiday by Shane McGlaun on November 26th, 2008 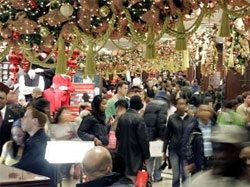 The poor economy is no longer a surprise to most Americans, but for many things look grim this holiday season. We have had reports that claim spending will be down significantly this holiday season in all areas but consumer electronics.

A new study from ABI Research claims that despite the economy many consumers plan to spend the same amount this holiday season or more. The survey polled 1600 households and found 47% of respondents planned to decrease spending.