Posted in Controllers by Shane McGlaun on November 7th, 2008 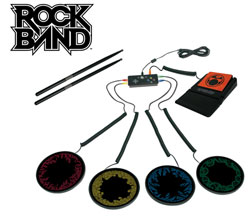 I have talked before about Rock Band and how much fun it is to play with a group of friends. I’m not the only Rock Band fan out there that likes to play the game. Popularity for the game is so high that there is a wealth of aftermarket controllers on the market for the Xbox and the PS3. You don’t see that many for the Wii though.

Mad Catz has announced that it will be changing that. The controller maker has signed an agreement with Nintendo that will allow it to build and market officially licensed Wii Rock Band controllers outside of Asia.

According to Mad Catz, it will offer two accessory controllers for Wii Rock Band Fans by early 2009. The two products will be the bass guitar and the Portable drum system. I keep hoping that Mad Catz will announce the same gear for the PS3. I’d like to get the portable drums and the bass for my own Rock Band.