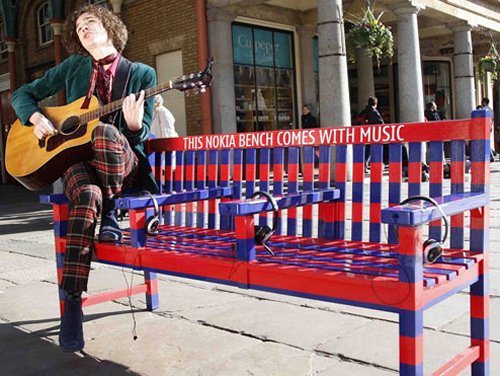 When you think Nokia, you think cellphones. But now the cell phone maker is getting into the bench biz. Nokia is setting up musical benches throughout the United Kingdom, in ‘secret locations’, in order to promote their Comes With Music audio service. Each bench will feature three integrated handsets with headphones so passers-by can sample music.

Apparently the track lists will mirror the region where the bench is deployed, so you would get the Beatles in Liverpool and say Black Sabbath in Birmingham. You probably already want to steal the bench since it’s neat and all. You can’t. Each will be under close supervision by a security guard and a “performer”.