Posted in Science by Darrin Olson on September 23rd, 2008 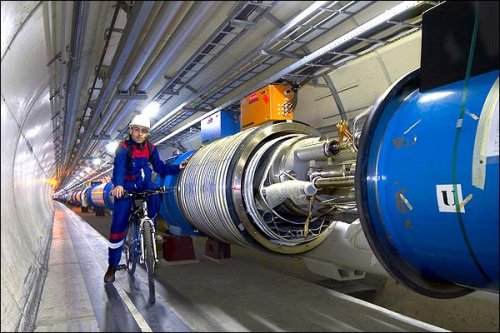 Officials at the European Center for Nuclear Research (CERN) announced on Tuesday that the world’s biggest physics experiments will be on hold until April. This comes as result of recent large, unexpected helium leak into a sector of the Large Hadron Collider (LHC).

Earlier this month CERN had its first successful test run of the LHC by sending a beam of protons clockwise through a 17 mile ring making up the system. The next steps were to send the proton beam counter-clockwise through the LHC, and then eventually send beams in both directions having them collide in an attempt to study new forms of matter that could not be studied in any other existing machine.

Research into the helium leak has shown that the likely cause was electrical connections between two of the superconducting electromagnets which caused a what is called a “quench”, where the electromagnets got too hot and melted, allowing the helium to leak.

A physical inspection of the magnets will require the sector of the LHC to be brought to a normal ambient temperature which takes three to four weeks. Once this is complete it will be too close the CERN’s Winter maintenance period for the LHC to be started again, which pushes further tests and collisions out until early Spring of 2009.