Posted in Microsoft by Conner Flynn on September 18th, 2008 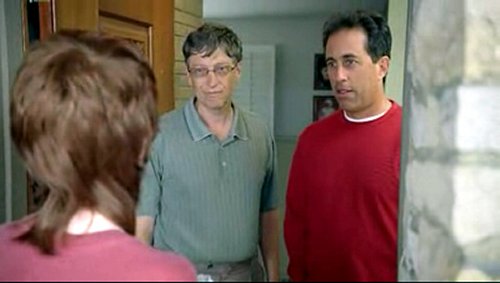 Apparently, according to Gizmodo, the internet jumped the gun and those Microsoft Gates/Seinfeld ads have not been cancelled after all. Microsoft apparently did ask the agency to focus on the new “I’m a PC” spots and the agency did get a lot of WTF response in their measured statistics of the ads. But apparently no one has pulled the plug yet. In fact, Crispin Porter has another completed spot featuring the dynamic duo ready to air when they see fit.

The agency has the anti-Mac ads as a priority, but they are still going ahead with more Seinfeld/Gates ads unless Microsoft actually does pull the plug at some point. Which is awesome, because many nerds are counting on the comedy pair. They’re the new Dean Martin and Jerry Lewis, the new odd couple, the new Ambiguously Gay Duo. Not that there’s anything wrong with that.