Posted in iPod by Conner Flynn on September 8th, 2008 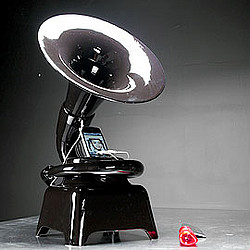 Here’s something retro and neat. Dock your new music thing into an old music thing. It’s the Phonofone II, Limited Edition in Black and it’s designed by Tristan Zimmerman with only 200 of the devices available for sale. It looks like yet another iPod speaker dock in the shape of a Victrola but this time it’s different, I swear. It uses no power except the power of your iPod Classic or iPod Touch to amplify music through the horn part of the Phonofone II at 55 decibels.

So it’s like actually blending the technologies of past and present. Ok, not really. The iPod Nano or shuffle won’t be powerful enough to amplify the Phonofone II unless you use an inline headphone amplifier. It’s like Thomas Edison and Steve Jobs collaborated, with Steve setting the price. The Phonofone II sells for $600.