Posted in Speakers by Conner Flynn on September 8th, 2008 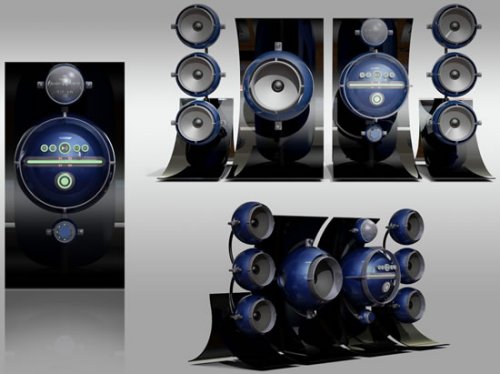 It’s still a concept, but the latest Sphere Sound System rocks it’s name. Obviously aliens are designing gadgets on this planet. The entire music system is round, not just the speakers. It is copletely and utterly spherical. Even those backwards tin hat wearing believers that the Earth is flat can not deny the roundness of this thing. Plus every piece is designed with maximum function in mind.

The subwoofer has the largest speaker and the speaker cone is flanked by two tri-channel speakers, which can be used as a 2.1 surround-sound system. The holes on the sides of the speakers are not ears, but allow deeper vibrating sounds out, which helps to generate ultra deep bass. Every sound is emphasized in the spheres. When using the unit, the main function buttons and the drive glow green. When it’s off, the power button glows red. The LCD screen also glows as the system plays music. Not only is it super functional, but just look at the decorative statement it makes.