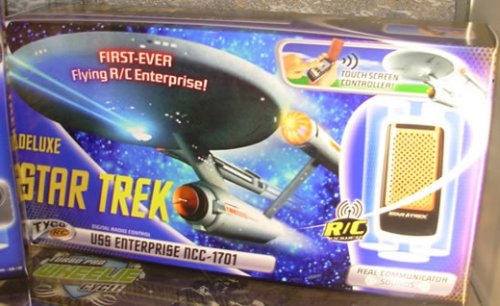 As far as I’m concerned the best Trek Vehicle ever is the Final Frontier bike, but this RC Enterprise glider sure looks like a ton of fun too. It took a long time, but we finally have a remote controlled Star Trek ship. For the most part, it’s just as graceful as the real deal and seeing the Enterprise soar through the air gets my geek blood boiling.

It’s made of foam and features a touch-control controller designed to look like the communicator from the original series. Check out the video below. The thing even flies after it took a hard landing and lost a nacelle. Also near the end the operator manages to make the smoothest landing the enterprise has ever seen on or off the movie screen. The Star Trek U.S.S. Enterprise NCC-1701 should arrive in May of 2009 and can now be pre-ordered for $79.99.