Posted in Mobile Phones by Nino Marchetti on July 22nd, 2008 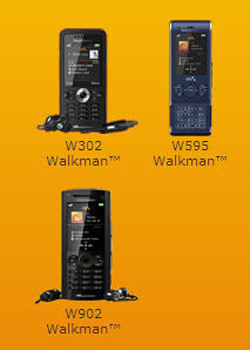 Sony Ericsson is celebrating the Walkman phone’s third anniversary by adding three new mobiles to the family as well as a small army of new accessories. All of these products will be available by the end of the year.

The mobile phone company is specifically debuting the W302, W902 and W595 Walkman cell phones to select markets around the world. It is also rolling out wireless and regular speakers as well as wireless and noise canceling headphones. More details on all of this and more can be found after the jump.

To coincide with the Walkman™ phone’s third birthday, Sony Ericsson has unveiled three brand new mobile phones giving music on the go to more users than ever. Best-in-class sound quality takes music on your mobile to the next level.

Today, Sony Ericsson unveils its latest innovative additions to the Walkman™ phone family: the W902, W595 and W302, and seven new music accessories. Sony Ericsson is unveiling phones and accessories with superior sound quality and pioneering features that take Walkman™ phones beyond music and expectations with fantastic extras such as great imaging and video capabilities.

“Since the launch of our first Walkman™ phone in 2005, Sony Ericsson has continued to pioneer a superior mobile music experience – and the 77 million Walkman™ phones sold to date are testament to this commitment,” says Ben Padley, Head of the Music Category at Sony Ericsson. “With this latest range of phones and accessories, we are offering high quality sound and a rich feature set that cements our position as a leader in the music phone category. We are pushing the boundaries of what people think is possible and are offering best-in-class sound quality and our most exciting Walkman™ phones to date.”

The list of pioneering and innovative features found on Walkman™ phones continues to be unmatched in the industry. Features like the music recognition application TrackID™, SensMe™, for matching your mood to the music and Shake control to change tracks with the flick of your hand make Walkman™ phones stand out from the rest.

With the W902, users can listen to music the way it should be heard: true to original. It’s also a mobile phone for those that want it all, with a five megapixel camera and great video capturing and sharing capabilities, an 8GB Memory Stick Micro™ (M2) for storing more than 8,000 songs**, the W902 is a top-of-the-range device that will make you the envy of your friends.

The W595 Walkman™ is perfect for those who want to share sounds with their friends. Store and play more than 1,900 songs** through the built in stereo speakers. Plug in the in-box sharing jack to listen silently to your tunes with a friend or Bluetooth™ your sounds to Sony Ericsson’s range of wireless speakers.

The next generation of accessories includes three new sets of speakers, the MBS-200, MBS-400 and MPS-100, to help music lovers go beyond the individual and play music directly from their mobile phone. Enhancing its music accessories collection Sony Ericsson has also introduced three new stereo headphones, HBH-IS800, HPM-88 and HPM-66 for the optimal listening experience.

With Sony Ericsson today music is reborn. What are you waiting for? Join the Walkman™ phone family and experience music how it was meant to be heard.

The Wireless Portable Speaker MBS-200 will be available in selected markets from Q4 2008.

The Wireless Portable Speaker MBS-400 will be available in selected markets from Q4 2008.