Posted in Watches by Conner Flynn on June 2nd, 2008 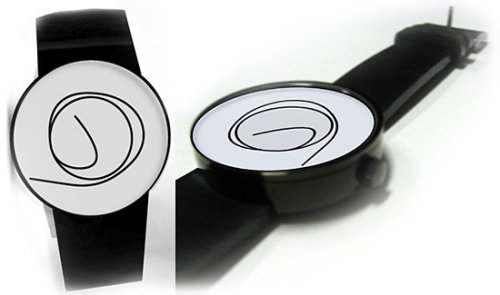 Jackson Pollock called, he wants his watch back. Lately, it’s become more fashionable to wear a watch that would puzzle anyone looking over your shoulder trying to get the time, then an everyday watch. Designer Denis Guidone came up with the idea that is simply named “Ora Unica,” or One Hour.

So how does one make any sense out of the scribbled line that occupies the face of this watch? Apparently, it has two circular faces, with the minute hand on one and the hour hand on the other. As time marches on, the scribble changes. I know, that explanation doesn’t really help. It’s crazy. I’m guessing it’s 11:40 or so in the pic. If I owned it, I know what I’d be saying. Time to get a new watch.