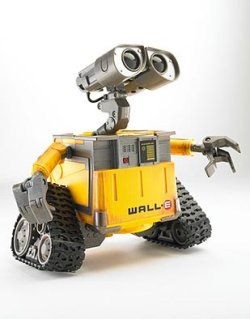 Behold robot fans. We told you about the ultimate Wall-E robot toy. Here’s an animated MP3 player in the form of Wall-E “Waste Allocation Load Lifter, Earth Class”. He’s available from the Sharper Image, but probably most people haven’t noticed due to the chain’s questionable futute.

The 8-inch-tall “iDance Wall-E” claims to talk and dance to the music and his eyes even light up. You can also plug in an iPod or other MP3 player. I suppose it’s the latest version of the “i-Dog,”, just much cooler, since it’s a robot. He only costs $24.95.