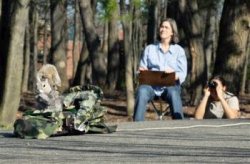 Hampshire College professor Sarah Partan is using a robotic squirrel named “Rocky” to get all social with the local rodents and study them up close. Rocky is controlled wirelessly from a laptop, and his tail and body can move realistically to communicate with other squirrels. He also plays pre-recorded squirrel noises from built-in speakers. The goal of the project is to study how animals communicate.

Apparently, Rocky is fooling them and has totally infiltrated Squirrel society, without letting on that he’s working for the man. Local squirrels seem to respond to him just like any other. That means that either squirrels are dumb as a bag of skittles or that Rocky is a pretty smart bot.