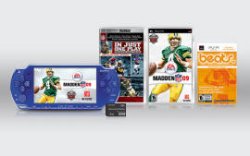 We’ve seen several versions of the PSP over the years, but until now none have been geared toward diehard Football fans. This one is for all the Madden fans, in celebration of the 20th anniversary of one of the most popular sports titles ever.

The bundle will have a limited-edition “Metallic Blue” PSP with the Madden NFL 09 game; “NFL: In Just One Play” on UMD Video; a voucher to download Beats (a new way to interact with your music collection on your PSP system. It uses a beat-tracking technology to create gameplay from any song the player supplies) from the PlayStation Store and a 1GB Memory Stick Pro Duo. So if you’re a huge Football fan, the bundle will be available on August 12 for $199.