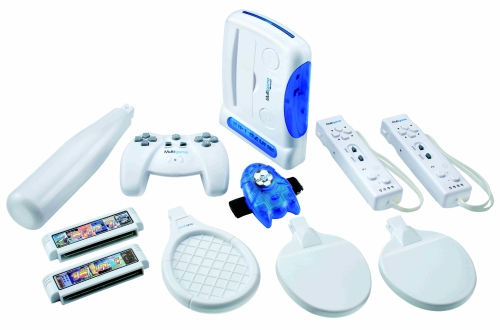 All had been quiet on the Chinese front, so I knew we were about due for another Wii knockoff. I guess the Vii and the Vii2 weren’t cutting it for cheapasses who want to play games, so they upped the ante.

China Shenzhen Firstsing Company Limited, a company who brought us an unnecessary cooling fan for the Wii(And probably some other wacky stuff), now gives us a 7-in-1 gaming console. It looks alot like the Wii. You’ll get amazing 16-bit graphics technology, as well as sports games that are “similar to those on the Wii, but more cheaper,”. They even threw in a wireless gamepad, and 2 remote controls that look oddly familiar. Looks like they’ve also done away with the old fashioned CD and replaced it with a small but long cutting edge cartridge. You’ll also get the shown attachments, so you can spank yourself after buying it. Better yet, have someone else do it while you say “Thank you sir. May I have another.”