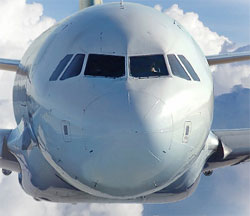 Last week we talked about the completion of Aircell’s coast-to-coast network for providing Internet access to passengers on commercial airlines. This service marks the end of one of the last locations that we can’t get broadband access. You would think if a company could set up a coast to coast network for providing in-flight Internet that we could roll broadband out to rural areas of the country as well, but I digress.

Aircell announced today that it has received two FAA certifications needed before its service can become operational. The first certification is a Supplemental Type Certificate that permits the installation and operating of Aircell’s network on commercially operating Boeing 767-200 aircraft. What’s not clear to me is if that is the only aircraft that is approved to operate the network.

The second FAA approval is the Parts Manufacture Approval that authorizes Aircell to build aircraft parts at its Bensenville, IL plant. The approval of its manufacturing facility means that Aircell can now begin building the components needed for its network and install them in its aircraft.