Posted in Processors by Darrin Olson on March 17th, 2008 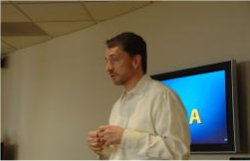 As if this isn’t enough, Gelsinger also talked about “Nehalem”, which is Intel’s code name for an entirely new chip design that will hold up to 8 processors on one chip and will also be available before then end of the year. Nehalem could be used to bump up speed on anything from a notebook computer to a server.

To top it off Intel showed off one last code-named processor that is a little further out called “Larrabee”. Although Intel doesn’t say exactly how many processors the Larrabee chip would have, they did show pictures with as many as 12 processors. This line of chips would be used for very processor-intensive tasks such as graphics programs, and would likely be direct competition for NVIDIA.