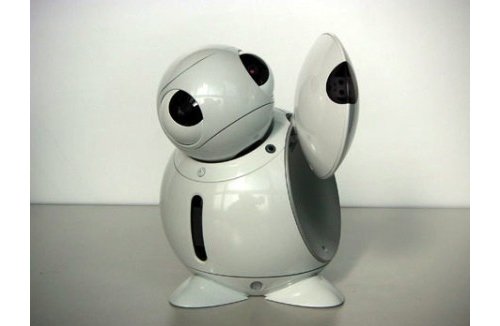 Another robot with the Stormtrooper color scheme. Be scared. Be very scared. The ApriPoko robot will store all your remote control’s commands. After storing the remote’s commands, it will then respond to your voice. So say goodbye to your remote.

But first you’ll have to train ApriPoko like some Pokemon. He is smart enough to capture the infra-red beams, each time one passes it and it will ask you what has just happened? When you give it the information, the robot will store the command and also the infra-red signal details, which can be used later.

For instance, let’s say you have a stereo with a remote control. While you’re turning the volume up or down using the remote control, then ApriPoko robot will ask you what it’s for, if this is it’s first time encountering that Infra red signal. It’ll store it after it’s been told what the signal is for. And the next time you want turn the volume up or down, you can just tell the robot and he will do it. Right now it’s just a prototype, but one day soon who knows.